Chris Reilly, the Foundations professor at Eastern Michigan University’s Art and Design Department, and his Intro to Two-Base Media class were in for a challenging and fun experience as they were asked to decorate the lobby for the 54th Ann Arbor Film Festival in the Michigan Theater.

Every year, EMU’s Art Department and CMTA Department work in collaboration with the Ann Arbor Film Festival to have someone from the festival visit EMU. Reilly has worked with the festival last year where he installed a flat screen art piece in one of the satellite exhibitions. Now, with a closer relationship with the festival, Reilly along with his students will for their first time install the first thing visitors will see at the festival.

Since installation is a specific site artwork that is designed to take up a space, Reilly and class of six students had to brainstorm materials that were relevant to the Michigan Theater, Ann Arbor and Southwest Michigan and what could fill the grand lobby all under a low budget.

Eventually, they zeroed in on their material. Water bottles.

They chose water bottles because they were cheap, plentiful, and because the class has talked a lot about the Flint Water Crisis.

“I think that was kind of what initially sparked the conversation just reading about how there they have like this overload of water bottles and we can make something beautiful or interesting with these things that are like the garbage that is coming up out from the crisis,” said Reilly.

“The point is not to be specifically activist or protest, but to think about how those things as the material is relevant to like the here and now,” he said.

Before the group started working on their water bottle project, they researched lobby decorations in the past, what the film festival may be interested in and the theater lobby as a whole.

“We thought about painting it gold to go along with the orient architecture that is already there and also thinking about the festival and how it is very much about experimental films but also about color and light as these kind of basic building blocks and time. So, we are working with some other materials like space blankets, shiny Mylar and colored transparencies so these kind of make sense because it looks like something you can use in lighting something for a film,” said Reilly.

“I think there are kind of these undertones of like maybe a little bit of talking about what’s going on in Flint but not in the way that is making it all about that. It’s kind of like roping people in with something that is engaging and interesting to look at and they sort of think about what the materials are and why they make sense,” he said.

A graduate student in Reilly’s class, sculpture interdisciplinary major, Rita Lee, is a part of a group dynamic that she has not been in for a long time.

“With this class, specifically, I think to work in a group-- I think the dynamic shifted my processing of like learning to cultivate patience and communication,” Lee said. “Normally when you are an individual artist competition happens in your head and it’s much more like a quiet one direction thing. I think this is maybe a lot more flexible which is something good.”

“The most I got out of it was working with people and a broader perspective to how this communicates,” she added.

However, with the project came challenges for the group. Reilly and his students had about an estimated four weeks to work on the project and a budget of a few hundred dollars.

“It is in some way a lot of pressure but in a healthy way because we have a very tight budget and a very tight timeline so it forces us to be more creative and come up with solutions we otherwise wouldn’t have come up with. It has defiantly been stressful but in a productive way.”

Within the challenges and difficulties Reilly is excited to see what is going to come out of it. His favorite part of the process, he said, is to see the artwork set up.

“There’s a lot of sweat and tears that goes into the stage of prototyping and experimenting and seeing what works and what doesn’t. Luckily, the folks who are going to come to the film fest don’t get to see any of that so they just get to see finished product.”

“I think there’s going to be a nice pay off when we actually get it up and see all of our efforts combined,” he said.

Reilly and his student’s finished artwork is currently on display at the 54th Ann Arbor Film Festival in the Michigan Theater, which will run until March 20. 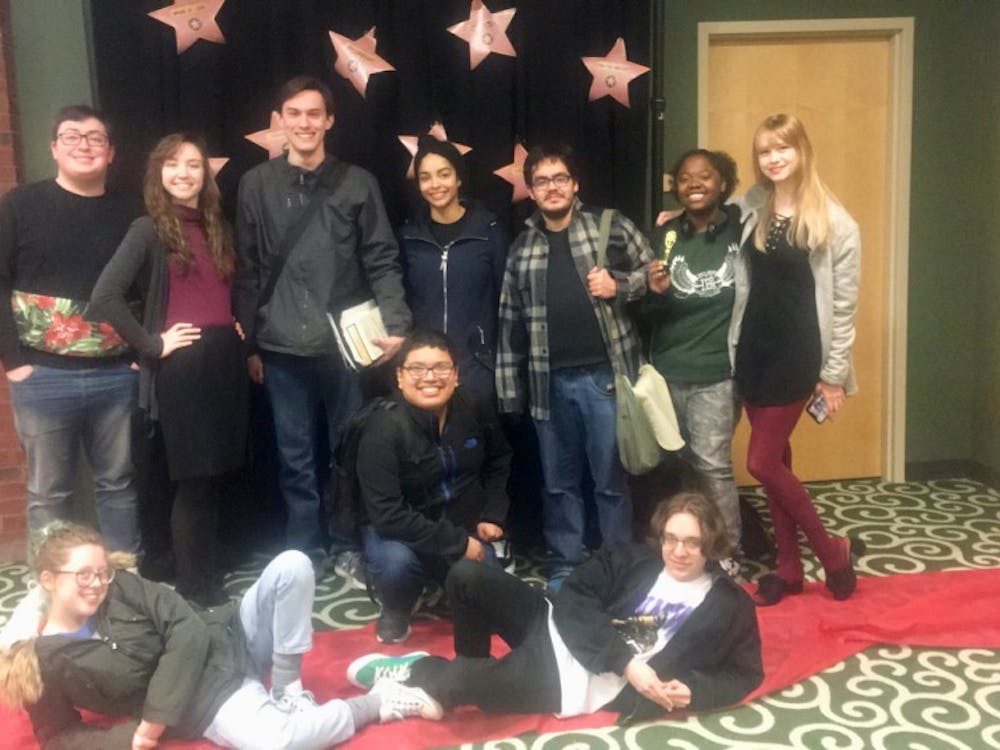