New parking kiosks and pay-by-phone options were apart of the proposed plan presented by the DDA on Sept. 10.

At the Sept. 10 city council meeting, the Downtown Development Authority (DDA) presented a plan that included several parking changes that could debut in in Depot Town and Downtown Ypsilanti within the next year.

Community Development/DDA Director Christopher Jacobs described a three phase approach to implement more paid parking in some of the city’s busiest areas. All three phases of the project will hopefully be completed by the end of the year in 2020, according to Jacobs.

For phase one, the city will work with a vendor called Passport Inc. to allow people to pay through an app on their phone.

“The first big change that we’re going to be rolling out here is the pay-by-phone system,” Jacobs said. “So that’s going to involve placing stickers on existing conventional meters (approximately 367 meters) or new kiosk spots … to allow people to pay by phone. That will be a huge convenience to people, hopefully.”

Although quick and convenient for smartphone users, a 25-cent surcharge would be added for those who pay by this option. The DDA also recommended increasing parking costs to $1 per hour.

Phase one would also include the installation of three parking kiosks in Depot Town, one in the Ypsilanti Freighthouse lot and one on both sides of Cross Street. In Downtown, kiosks would be placed on both sides of Michigan Avenue, where there is currently free two-hour parking.

For phase two, paid parking meters would be added on River Street in Depot Town. Kiosks would then be added to the lots off N. and S. Huron Street, eliminating the current two-hour free parking there.

In Depot Town, phase three would include putting a kiosk on Perrin Street just south of W. Cross Street. A kiosk would also be added on Normal Street, which currently has regular parking meters. In Downtown, kiosks would be added off Washington Street and N. Adams Street.

Mayor Pro-Tem Lois Richardson expressed concern over how the changes would affect people visiting the city.

“This whole thing … no longer makes us a friendly city,” Richardson said. “Many people say they come downtown because they can park for free and go and do their shopping and do what they want. And they say the same thing about Depot Town.

“One of the things that people always say to me is ‘Whoa, I’d rather come to Ypsi, and I don’t like going to Ann Arbor because I can’t find a place to park and, when I do, they charge me an arm and a leg.’ I just hate to see us going down that same path.”

Several members of the community spoke against the proposed parking plan during public comment.

Ypsilanti resident Susan Carter questioned how parking would affect the farmers market or those just needing to make a quick stop at an establishment.

“It would be nice to have areas around restaurants where I could just pull in, park, run in and get a carry out,” Carter said. “Or if I have to pick something up at the Co-Op, I could run in and out — no one shops at the Co-Op for two hours.”

In regards to the pay-by-phone option: “It’s a level of privilege … not necessarily everyone has a smartphone,” Carter said.

“If we do the parking system the way it’s proposed, it’s not handicap accessible,” Collins said. “When I went to [the heritage] festival, I had to park at Abes Coney Island and walk … and I have a handicap permit … We need to have more handicap parking areas throughout Ypsi.”

The parking improvement plan is not a set policy. Council members have until the next council meeting on Sept. 23 to discuss the plan and propose changes. 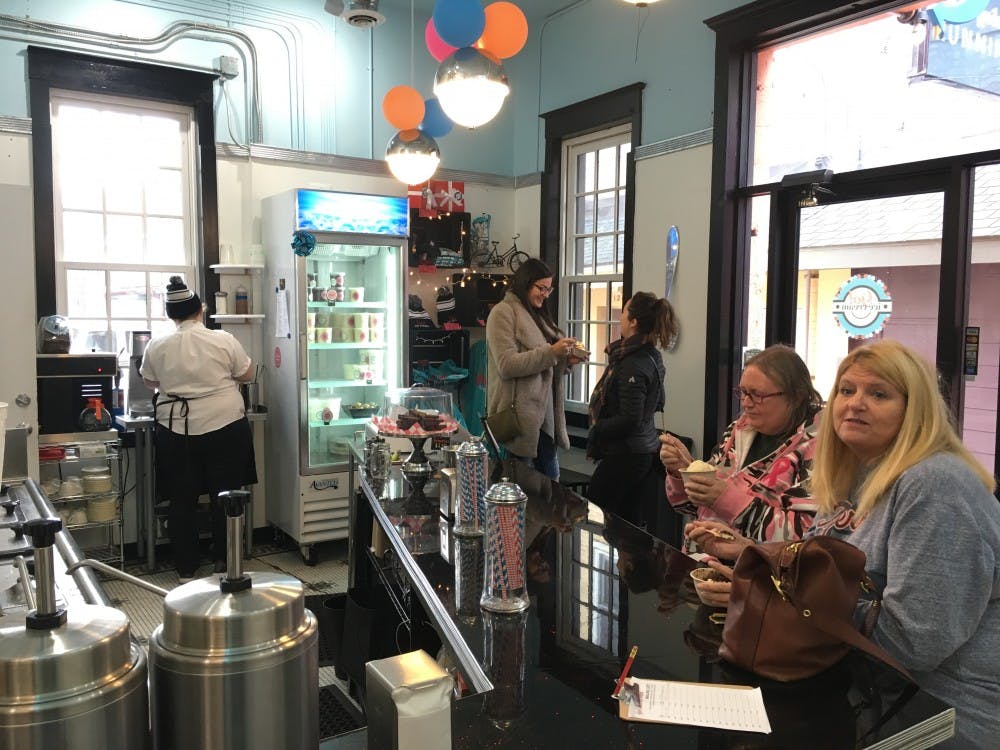 I scream, you scream, Ypsilanti screams for Go! Ice Cream