Eastern Michigan is off to a hot start at 3-1 heading into their bye week.

The Eagles head into halftime against CCSU at Rynearson Stadium on Sept. 21.

The Eastern Michigan Eagles hold the best record in the Mid-American Conference at 3-1 after one month of play. This is just the second time in head coach Chris Creighton's tenure in Ypsilanti that the Eagles have gotten off to such a start. The Eagles have wins over Coastal Carolina, Illinois and Central Connecticut State. The loss was on the road against Kentucky.

"Our record is reflective of what we believe. We have the ability to play at a high level and be successful on Saturdays," Creighton said. "If somehow we're able to play at our high level in all three phases of the game and being consistent, taking the ball away, taking care of the ball, then I think we got a chance to win every time we play. Can we do that all the way through? That's a really hard thing to do. If we aren't playing at a high level, then I think we'll lose. There's a lot that has to happen and a long way to go."

The Eagles have used a variety of different weapons on offense to start their 2019 season. Mike Glass III completed passes to eight different receivers and Dylan Drummond led all Eagle receivers with five receptions and two touchdown grabs in their first victory over Coastal Carolina. Shaq Vann rushed for 84 yards on 22 carries for the Eagles.

Following their 30-23 win over Coastal Carolina, the Eagles continued their road trip as they took on the Kentucky Wildcats. Glass threw his fourth and fifth touchdown passes of the season, yet threw his first two interceptions. Glass would end his day with 337 yards on 34 completions in the Eagles' 38-17 loss. He would connect with nine different receivers, including touchdowns to Line Latu and Bryson Cannon. Defensively, Eastern Michigan held Kentucky to just 222 yards passing. However, the Wildcats backfield would combine for 239 yards and three scores. The Eagles forced two fumbles and recovered one.

In a bounce back game at Illinois, the Eagles would earn a victory over a Big Ten opponent for the third consecutive season. In their 34-31 win, Chad Ryland hit a career-long 52-yard field goal and the game winning kick as time expired to give the Eagles the victory. Glass would keep his hot streak rolling, throwing for three additional touchdown passes and again connecting with eight different Eagles for receptions on his way to a 316-yard passing performance.

Glass also gained 37 yards rushing, being one of three Eagles to carry the ball over 10 times against Illinois. The Eagle defensive unit kept its turnover streak alive, as Korey Hernandez picked off Brandon Peters late in the game. Peters also fumbled the football twice, losing one to the Eagles.

In their most recent game, the Eagles overtook the Blue Devils of Central Connecticut State in thrilling fashion when Matthew Sexton blocked a punt and returned it for a touchdown to give the Eagles a 34-29 lead with just seconds remaining on the clock. Glass threw for a career-high four touchdown passes and two interceptions that came in the final quarter. Glass connected with 10 Eagles receivers on his way to a 279-yard day. The Eagles also had eight different players attempt a carry, Willie Parker leading the way with 51 yards. Kobie Beltram was able to force a fumble and continue the Eagles' turnover streak to four consecutive games.

"It feels good. It was a rough win as you guys saw. But you know, a win is a win. There is a lot to learn from and there's a lot of stuff that we have to improve on but it feels good," Sexton said. "It's onto the next week. It doesn't matter if we have a bye week or not. We have to keep practicing hard and executing things. Offensively, we have to get the ball moving a little more. It's the same thing every week."

The Eagles return to action on Oct. 5 against Central Michigan. 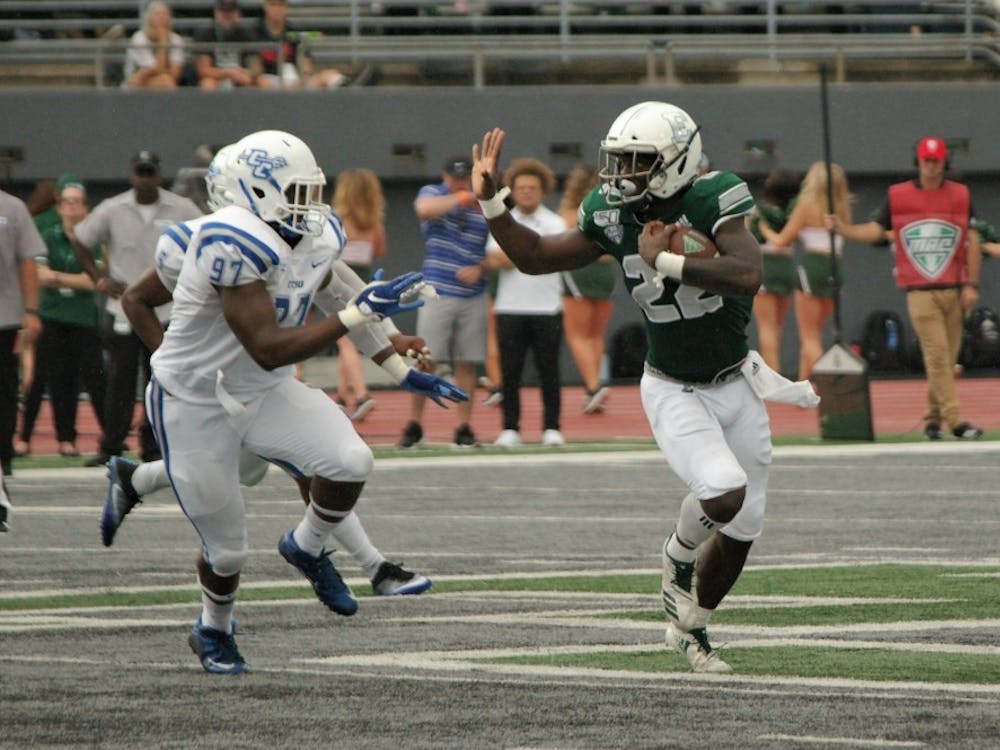 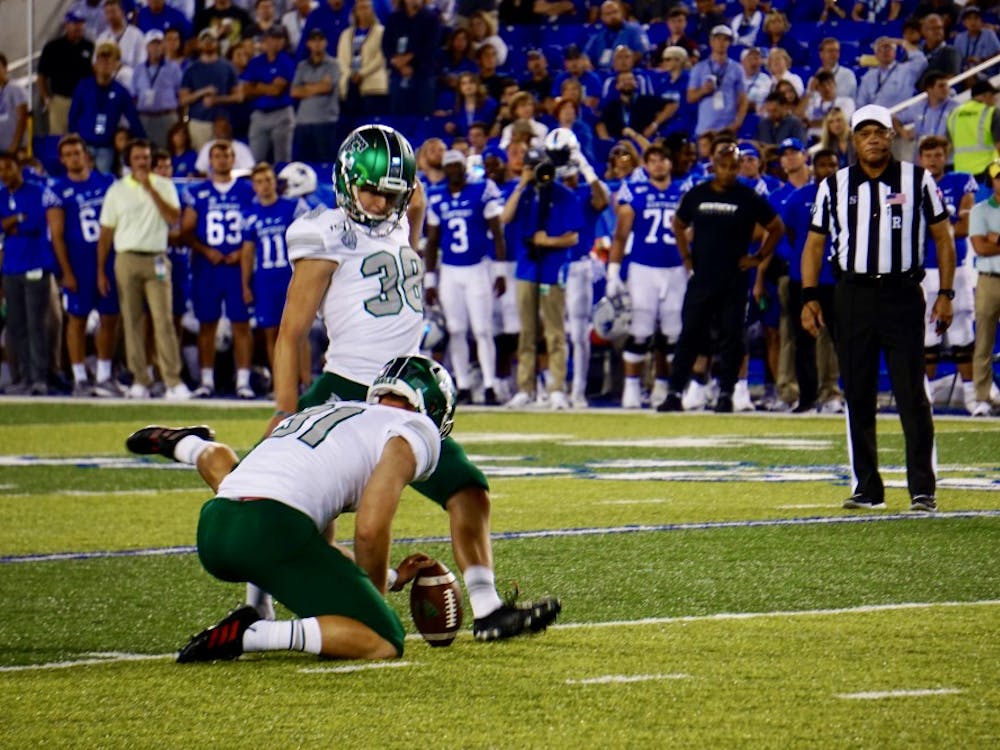