The Eagles begin their season with three non-conference games.

The Eastern Michigan men’s basketball program is looking to improve on last year’s 9-9 record in the Mid-American Conference.

The Eagles are in a potential rebuilding season after losing four seniors who were major contributors during the 2018-2019 season. However, this schedule is not as difficult as last year's.

Games against the Michigan State Spartans and UMBC highlight Eastern’s non-conference schedule, which is nowhere near as difficult as the games against Duke, Rutgers and Kansas from 2018-19.

“Where will the scoring come from” is the big question for Eastern Michigan going into this season. Last year’s point leaders were Paul Jackson, Elijah Minnie and James Thompson IV. All three of these players graduated.

The only player from last year’s top-five scoring list still on the team is Boubacar Toure, who finished fifth on the points leader list. Players to watch on the offensive side of the ball this upcoming season would be Jalen King and Ty Groce.

On the defensive side, Eastern is in better shape. Eastern runs a 2-3 zone defense that relies on the individual player’s discipline and movement. The Eagles have been able to recruit talent consistently, and with Toure in the middle of the paint and athletic wings guarding the perimeter, the defense is looking strong.

“In the eight years that I’ve been here, we’ve been at the top of the conference five of those years,” EMU head coach Rob Murphy said.

“It’s a proven defense. I think our issue last year was our shooting. We were in position to win a lot of those games, but it comes down to decision making. We should be pretty good anchoring the zone from the inside out. It’s a unique defense. We’ve shown the capabilities of being a great defensive team.”

Eastern’s first matchup is against Siena Heights on Nov. 8. Siena Heights had an overall record of 17-13 last season, with marquee wins being two wins over the University of Michigan Dearborn. They lost to Eastern Michigan 90-72.

From a matchup standpoint, Eastern matches up well physically. The team’s tallest player is 6’8” and weighs 200 pounds. Toure is 7’0” and weighs 235 pounds. All of Eastern’s forwards have favorable matchups against Siena Heights as well. This will be very influential when Siena Heights plays their man defense against Eastern Michigan.

A player to watch would be Siena Height’s Keith Jordan Jr. The senior forward is athletic and makes plays in the paint for the Saints. Siena Heights runs a play-based offense, but their execution and timing can be lacking at times. They have good movement off the ball and can come up with some good shots if Eastern is caught off-guard.

Eastern Michigan’s second game is Nov. 12 against the Goshen Maple Leafs. The Leafs had an 8-22 record during their 2018-19 season, with one of those losses being a 97-74 loss to Eastern Michigan. The Leafs have an unbalanced offense that either throws up a shot within the first five seconds or has a lethargic offensive set. Their set has a player in the paint and four perimeter players. A player to watch would be Landon Newman, a freshman forward with a knack for finding space in the paint.

Eastern Michigan’s third game in the 2019-20 season is against University of Michigan Dearborn on Nov. 14. Dearborn is an experienced team with talent, having two guards in Juwan Harper and Xavier Crofford. They have a strong offensive approach with off the ball movement and smart passes. They are a well-coached team with a balanced approach to offense, having good shooting and driving.

“I think we’ll be in a position to compete for the MAC championship,” Murphy said. “We had a good year the year before, and last year wasn’t as successful as it should have been. But, I have tunnel vision, and after feeling like we didn’t do as well, I’m determined to compete for a MAC title. Whether it’s recruiting or whatever, I’m trying to figure out how we can be better. I’m determined to show everyone that Eastern Michigan basketball is here to stay.” 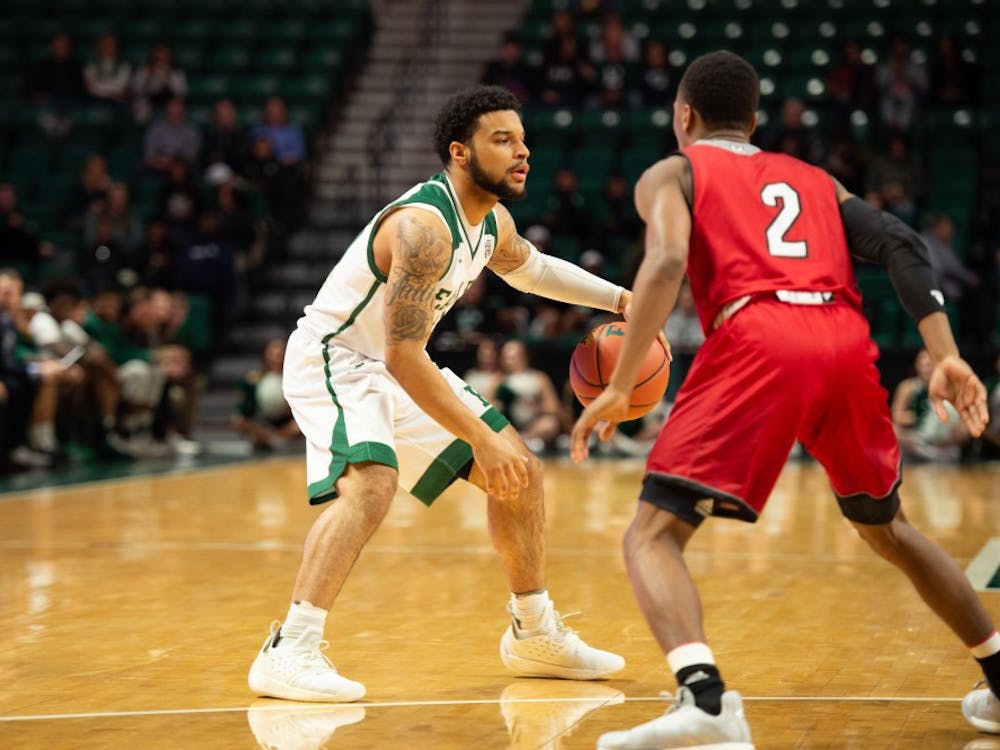