Protect Life at EMU put out a display last Tuesday and had every right to do so.

Protect Life at EMU, a campus organization “committed to engaging the EMU campus in the Pro-Life cause,” put out its annual “Cemetery of the Innocent” display in the grassy area adjacent to Pray-Harrold last Tuesday, Oct. 1.

The display was simple in design: rows of pink flags, which some students had initially mistaken to represent breast cancer awareness, and a sign with statistics on “lives lost to abortion.” The design is also similar to another annual display, the pride flag constructed with multicolored flags in the same area.

The similarity in the medium yet the differences in the message prompted concern among many EMU students, and some called for the display to be either taken down or to never be displayed at all. Some suggested it was placed in the same area of the pride flag to suggest that the mission of the display was not only centered around abortion but also animus towards the LGBTQ+ community.

I have several opinions on the subject and conducted several interviews to get a better idea of the factors at play. The central argument I’d like to make is that this display is a near-perfect example of some of the misconceptions around free speech on this campus and nationwide.

I met with representatives from Planned Parenthood: Next Generation (formerly Students for Choice) and Protect Life at EMU to discuss some of their thoughts about the display.

In my meeting with Dallas Gomez, the second-year president of Protect Life at EMU, I got some of the details out of the way: whether proper channels were gone through to put on the display, how long it was out, etc. The group had permission to reserve the space, warned campus police in case of any foul play by students upon seeing the display and stood ground near the flags to keep an eye on things and give information about the organization’s cause.

Protect Life’s need to be present at the display and the fact that it was only out for a couple hours were largely in response to the vandalism that occurred last year, when flags were moved and removed to alter the group’s message. Although it was met with swift action via Student Government’s free speech statement, the vandalism seems to have had a “chilling effect” on the group’s free speech.

The group’s message, although I personally have my own faults with it, should not be silenced or made to be something it is not. The flags were placed in that area because of its high traffic; they were previously placed in front of the student center for the same reason. The group took proper precautions and members were available to give information at the site. They put on a symbolic, non-obscene display that was intended to start a conversation. Their method of messaging should not be conflated with the obscene photos and signs by the pro-life group Created Equal, which has a sketchy history of displaying unauthorized, graphic and somewhat misleading signs depicting abortion on campus.

Georgia Nagel, president of Planned Parenthood Next Generation (PPNextGen), would prefer more “responsible” messaging and urges the group to not only give information but also provide resources to prevent pregnancy and abortion.

Gomez noted that Protect Life at EMU is partnered with Project Rosie, an organization sponsored by Protect Life Michigan, which connects expecting mothers on campus with a variety of pregnancy and parenting resources.

While Protect Life at EMU admittedly does not connect their members or the community with contraceptive and pregnancy prevention resources, the members do reach out to expectant mothers and try to present alternatives to abortion – which do exist.

As a “personally pro-life, publicly pro-choice” individual myself, I wish that the organizations could have a concerted effort to both reduce the number of unplanned pregnancies and provide resources for expectant mothers (hint: Planned Parenthood does both).

These organizations represent very different sides of the abortion debate, and neither should be silenced. Free speech should be a guarantee on campus so these conversations can happen, whether it is on the free speech walls, a properly reserved high-traffic space, or for any student wanting to spread a message.

The American Civil Liberties Union (ACLU) voices the basis of my opinion well on its website: “The First Amendment to the Constitution protects speech no matter how offensive its content. Restrictions on speech by public colleges and universities amount to government censorship, in violation of the Constitution. Such restrictions deprive students of their right to invite speech they wish to hear, debate speech with which they disagree, and protest speech they find bigoted or offensive. An open society depends on liberal education, and the whole enterprise of liberal education is founded on the principle of free speech.” 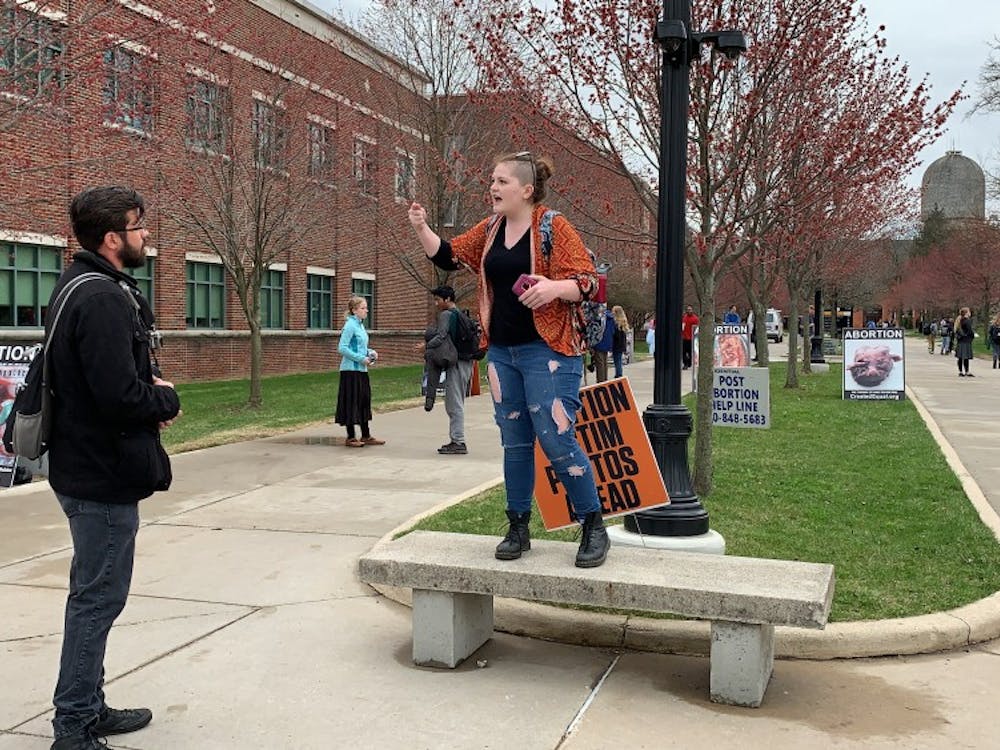