The Eastern Michigan women’s basketball team earned their first win of the season against the Olivet Comets on Friday, Nov. 8 at the Convocation Center. The Eagles bounced back from an 85-50 loss against Michigan State earlier in the week, defeating Olivet 95-38. EMU had five players score 10+ points in the blowout win.

Olivet led 6-4 at the beginning of the first quarter but EMU quickly responded with a 16-0 run, which was capped off by a corner 3-pointer from point guard Jenna Annecchiarico. The Eagles were pressing for the majority of the quarter and forced 10 turnovers in the opening period. Autumn Hudson totaled six points and three rebounds in the first 10 minutes.

Hannah Brown had six points for the Comets heading into the second.

“The press is something that we’ve been working on lately. With our team speed, it’s something that we can use to help us make the other team feel uncomfortable,” EMU head coach Fred Castro said. “We have a lot of depth and speed on this team. The upper echelon teams are so good in the half court that you have to find ways to score. And that’s one way to do so.”

The Eagles momentum carried into the second quarter as Courtnie Lewis’ mid-range jumper put EMU up 30-13 with 6:32 left in the period. A few minutes later, Annecchiarico scored on a eurostep and increased the Eagles lead to 36-17. Hudson finished the first half with a layup from Natalia Pineda, putting Eastern Michigan up 47-21 at halftime.

Juanita Agosto opened the third quarter with her first basket of the game on a layup, assisted by Annecchiarico. The Eagles started the half on a 17-4 run, which included a 3-pointer by Lewis. Constance Chapin, a freshman guard, scored her first basket of the game to end the third quarter, giving Eastern Michigan a 72-27 lead with 10 minutes remaining.

The game was out of reach heading into the fourth quarter but the Eagles started the period on a 13-2 run for good measure. Kiara Johnson scored three straight points to extend EMU’s lead to 89-29. Lewis added another 3-pointer to her total with 3:08 left in the game and the Eagles finished the game on top 95-38.

“Everybody played and everybody scored. I give my staff a lot of credit. They have done a great job of recruiting. And give the players credit, they look for each other,” Castro said. “That goes to show how good our chemistry is. They want to see each other do well, which isn’t always easy, but they all want to see us play well as a team.”

Eastern Michigan out-rebounded Olivet 51-25 and shot 53% from the field in the victory. Lewis had a game-high 15 points, as she shot 71.4% from the field and knocked down three 3-pointers. Johnson added 13 points for the Eagles, while Corrione Cardwell finished with 10 points and six assists. Brown led the Comets with nine points.

“Courtnie is just a scorer. From day one here as a freshman. I think she had 21 points in her first game here. It comes easy for her,“ Castro said. "What’s exciting for her is she played really good defense today. She helped us rebound. She moved the ball. She is adding more dimensions to her game. People look at the points but she can do that in her sleep.”

EMU returns to action on Saturday, Nov. 16 against Youngstown State. 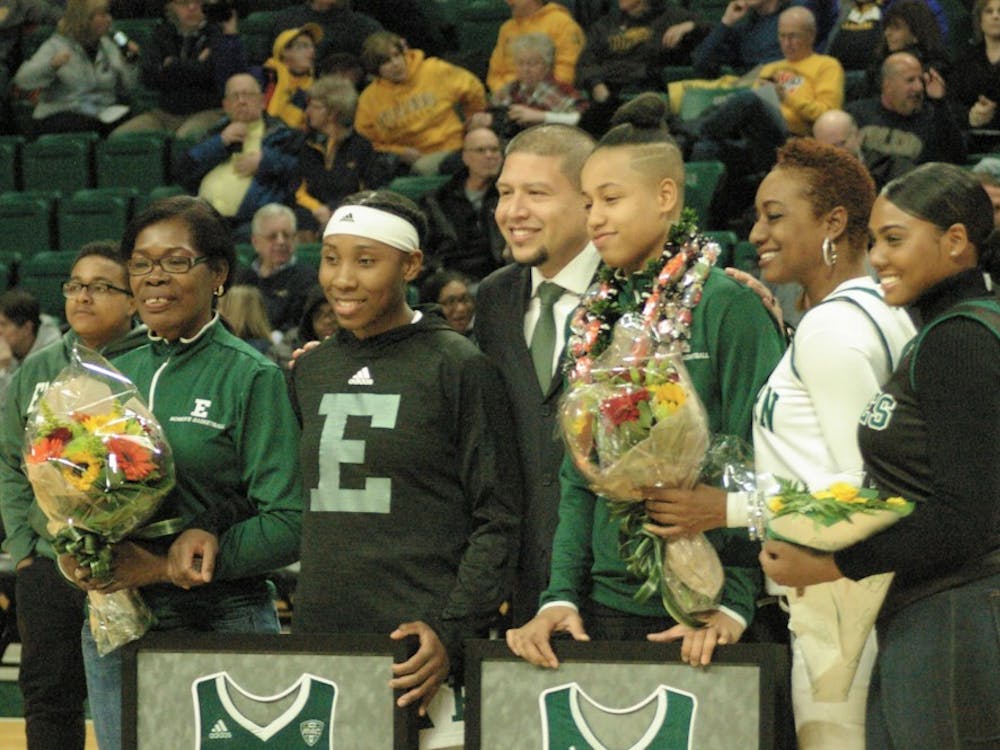