The men’s team moved to 7-1 and 3-0 in the MAC and extended its winning streak to seven dual meets. The victory also marked the 66th straight in MAC play for the men’s squad.

The women’s squad fell to 8-4 overall and 4-2 in the MAC and halted a five-meet winning streak.
Cole Bateman grabbed a pair of individual wins along with a third place finish as part of the 400-freestyle relay. Bateman won the 100-backstroke over Miami’s Davis Staley by almost a full second and beat Staley again in the 200-back.

Andrew Henry also walked away with two wins in the 200-individual medley and 200-freestyle along with a second place finish in the 100-free.

Mike Fisher beat Miami’s Evan Bader in both the 100- and 200-breaststroke events, beating Bader in the 100-breast by a margin of .11 seconds.

Kyle Lichtenberg placed second in the 500- and 1000-freestyle events. Lichtenberg took a runner-up finish in the 500-free to EMU teammate Franco Petrone with a margin of .13 seconds.

Miami (4-3, 1-2 in MAC) saw Joe Baumgartner win in the 100-freestyle and was part of the winning 200-medley relay team and got a pair of runner-up finishes in the 50-freestyle and the 400-freestyle relay.

Dan Nemeth had a busy day that was highlighted with a win in the 50-free over Baumgartner by a margin of .08 second as well as placing second in the two relay events and sixth in the 100-free.
Bader walked away with wins in the 200-medley relay.

Sage Stephens swept the two diving events with Miami’s Michael Nash coming in second after the two springboard events. Stephens took the three-meter dive with a score of 311.32 over Nash (301.81). Stephens scored a 297.07 in a tight one-meter dive over Nash (291.59).

Grace Van Allen and Rebecca Detro placed first and second respectively for Eastern Michigan in the 200-freestyle with only .02 seconds separating the two swimmers.

Monica Dorszewski won the 100-breaststroke and finished second in the 200-breast. Other Eagle swimmers getting wins included Jackie Swartz in the 100-butterfly and Jessie Godlewski in the 200-butterfly.

The Miami women’s team (8-1, 6-0 MAC) took eight victories in the individual events of the afternoon.

Katie Bootsma won two individual events for the RedHawks. Bootsma took victories in the 100-and 200-backstroke events and placed second in the 200-IM.

Stephanie Pearce was dominant in the long distance events for the RedHawks as she won in the 1000-freestyle and took a runner-up spot in the 500-freestyle.

The women’s team of Miami took both relay events that were within a margin of a second. In the 400-freestyle relay, a RedHawk relay team of Sara Krueger, Natalie Rohr, CC Fujan and Annie Marquiss beat an Eagles team of Sierra Wagner, Jessie Godlewski, Detro and Van Allen by a scant .10 seconds.

Danielle Hulvey won both diving events for Eastern Michigan with Miami’s Nikki Craft coming in second in the two events. Hulvey was victorious in the one-meter dive with a score of 309.83 and scored a 326.10 in the three-meter springboard.

Melynee Saya was third for EMU in the three-meter dive while Lauren Dark claimed third in the one-meter springboard. 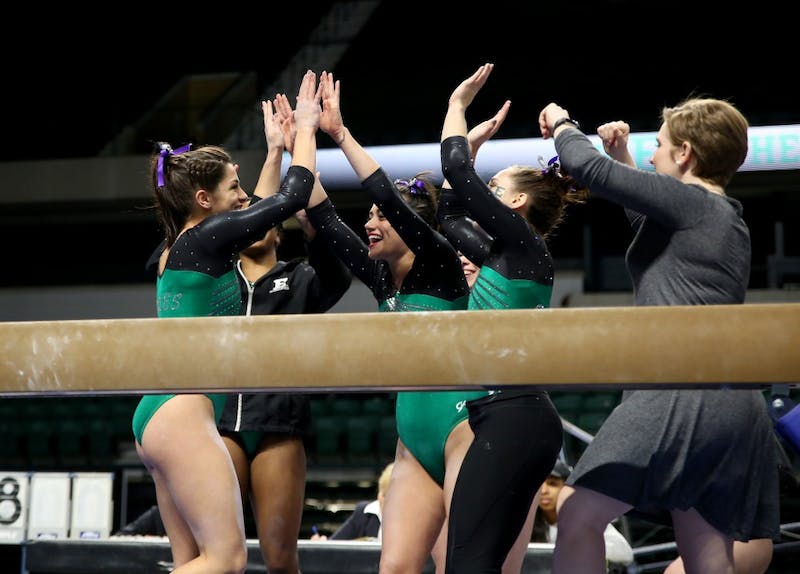