When Mariam Itawi, a journalism major at Eastern Michigan University, babysits her three-year-old nephew she admits that it can be a chore to figure out what he is trying to say. Instead of using verbal words, like most three-year-olds would be able to, he points, grunts and is forced to physically lead her to what he wants.

“Honestly, the biggest problem I have is probably him not being able to talk. He can't tell me what he wants and he sometimes doesn't find other ways to tell me," said Itawi. “It just isn't as easy.”

Her nephew is part of the one in 68 children who have been identified with autism spectrum disorder (ASD) and according to the Center for Disease Control and Prevention, this statistic has drastically increased from the one in 88 children diagnosed as of 2008.

With the increase in diagnoses and children struggling with verbal communication, more and more families are wondering what approach to take in communicating with and educating their child.

“I teach my students to communicate using a variety of methods depending on the strengths of the child,” said Claudette Snow, a special education teacher at Ann Arbor Preschool & Family Center who has been working with autistic children for the past nine years.

According to the National Autism Association, about 40% of children with autism do not speak. To complicate that a little further, there is not just one clear path in trying to teach these children how to effectively communicate.

“Every child deserves the respect of being understood and a chance to get their thoughts and wants expressed and honored,” said Snow. “I work every day to help all the children in my classroom to express themselves and I also keep in mind that it is very important to honor the requests of my students.”

Not only are science and a lot of research involved in trying to understand these children’s full potential, but advances in technology have also played an important role as well as the idea of augmentative and alternative communication.

The American Speech-Language-Hearing Association explains augmentative and alternative communication (AAC) as all forms of communication, except for oral speech, that are used to express thoughts, needs, wants, and ideas.

“All of the students are so different,” said Allison Greening, a Behavioral Psychologist at Eastern Michigan University’s Autism Collaborative Center. “We take a lot of time to get to know them and every program is unique.”

Behavior Analyst, Sarah Vuyk, doesn’t believe that speaking shows how smart a child really is either and she believes that it is important not to measure a child’s intelligence based on what they can verbally tell you.

“It’s just not a good indicator,” she said.

According to Greening, you can give many of these kids a verbal direction and they understand it. Receptive language is very high, just the expressive language may not be there.

“I'll talk to my nephew and point at things just like I would any other child,” said Itawi. “He can understand what's going on around him.”

Snow says that the communication methods she uses in her classroom reflect the child’s skills, for example, she uses sign language if a child has good motor planning skills, Picture Exchange Communication System (PECS) if a child is a visual learner, vocal words if a child is verbal and can be understood by the general population, and assistive technology for visual learners that have a high cognitive capacity.

The EMU Collaborative Center favors using real pictures of people so the child can use the pictures to say hello to someone and it can help them figure out who the person is.

“We use a lot of real-life pictures that we take as opposed to computer generated images,” said Kristine Kastle-Ruether, Managing Director at EMU’s Autism Collaborative Center.

Many special education classrooms with autistic and non-verbal children have now incorporated these devices into their everyday routines.

“We have iPads at school that we use for academic purposes,” said Bouwkamp.

Some that have been recommended by the non-profit organization, Autism Speaks, include iComm, iCommunicate, Proloquo2Go, TouchChat, and many more.

“We use Proloquo2Go, which is a program for an iPad,” said Kastle-Ruether.

Another popular, and fairly recent iPad program is TouchChat, which is very similar to Proloquo2Go. This application has a “word power” feature available that predicts what type of word will come next in order to help the child build a sentence. For example, if a child types in “I” then a full page of verb choices will pop up.

“We’ve had a lot of success with this,” said Bouwkamp.

In addition to tools like an iPad or PECS, some children have also responded to using visual schedules and choice boards.

Greening also believes that peer modeling is helpful and it enhances peer interaction, which is an important skill.

Children with ASD often times know what is going on around them, they are just not able to successfully express what they are trying to say through words, which causes frustration for the child.

“If he needs a door open he’ll grab my hand and put it on the doorknob. If he wants a cookie he’ll hand me the package,” said Itawi.

This is why so many professionals and families encourage others to realize that verbal skills do not measure how smart a child is and it is important to find a communication method that works for that individual child.

In addition to effective communication skills, ASD children also need to be encouraged to do everyday things more independently.

“We work on children’s eating skills, toileting skills, dressing skills, and more because through these skills our students will grow to lead independent lives,” said Snow. 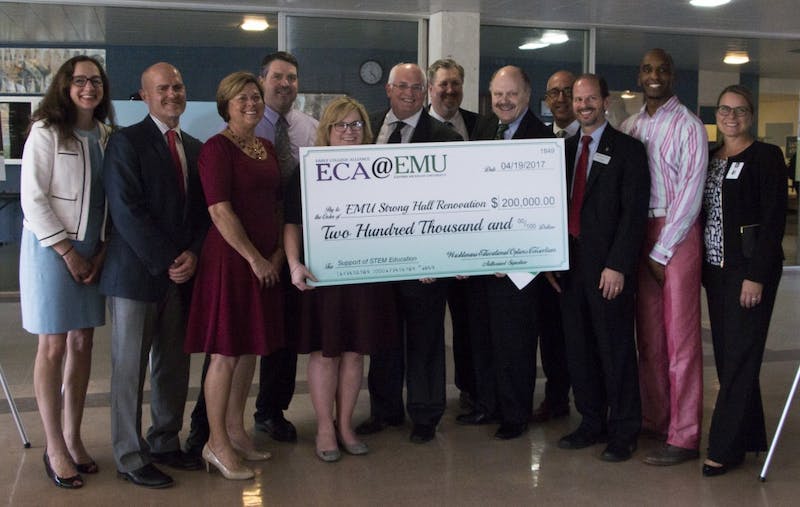