Opinion: We need to take dramatic action on climate change

Tornadoes ripped through western Ohio this week in a rare tornado outbreak that has already lasted 12 days.

A tornado tore through western Ohio this week and into the issue of climate change. The New York Times reported on Tuesday a story which originated from Mercer County, Ohio - my home. A devastating tornado had destroyed countless homes and took one life in Celina, OH Monday night.

On Tuesday morning, my social media accounts were flooded with stats and photos of the damage and relief effort, Facebook’s “marked safe” feature, fundraising attempts and a slightly comical, all-too-real story regarding a weatherman and an episode of The Bachelorette.

This western Ohio community, as well as its neighbors to the south in Dayton and its suburbs, has been absolutely shaken by this extreme weather, and they aren’t the only ones. For 12 consecutive days, an unprecedented, staggering number of tornadoes have occurred across the nation. Such a sustained outbreak is not as common as one would think, especially as the number of tornadoes occurring per outbreak is trending upward.

As the folks in my hometown are engaged in the relief effort, a hometown football star is even raising over $20,000 to rebuild the City of Celina. I want to make the point that although being reactive and engaging in relief efforts for natural disasters often brings out feelings of community and compassion, we ought to extend those sentiments to preventative measures, being both proactive and reactive in the face of extreme weather that may be brought on by climate change.

Although we will never be free of natural disasters, the fact that occurrences of almost every major disaster are increasing as time goes on may indicate an intensifying climate crisis. Shrugging off climate change as “global warming” has been detrimental to the big picture, as weather and climate often get conflated by the general public and our public officials. In truth, extreme weather conditions, like tornadoes, are largely correlated with climate change given the information available. There are things humans can do to mitigate the effects of climate change and natural disasters on the communities they impact.

On a national or statewide level, we could go the political, environmentalist way by investing in renewable energy and taxing carbon emissions to slow down the progression of man-made climate change.

We could also implement population controls through better family planning and reproductive healthcare. Population shifts are large contributors to climate change; output by factories and farms, the largest contributors of carbon emissions, depends heavily on population.

On a local level, we could incentivize and invest in better infrastructure and home-building strategies, especially for our public buildings and shelters.

Finally, we must invest in climate science. If we have a better understanding of these trends, we can have a better action plan for combating climate change.

All of these come with a price tag, but so does our government’s efforts to remain dependent on nonrenewable energy and lax on improving infrastructure and healthcare.

We must invest, and we must do it soon to make any sort of difference. We need collective action by the government, private sector, and individuals to make all of these things happen. This can be done by incentive programs, the reallocation of funds, and public acknowledgment of the issue. It could make a meaningful difference to those impacted by these tragedies, as this concerted effort may make the public better equipped to handle them.

In sum, climate change is far more extensive than a given year being hotter on record - it also contributes to extreme weather in all seasons. Though it is still uncertain whether these tornadoes are caused primarily by climate change, the issue as a whole ought to be more intensely studied to have a more proactive strategy for overcoming disasters. Better strategies in home building technologies, population controls through reproductive healthcare, and providing renewable energy are attainable and could have long-term payoff. The damage already done may be irreversible, but concerted preventative measures can still be taken to mitigate the impact of climate change. 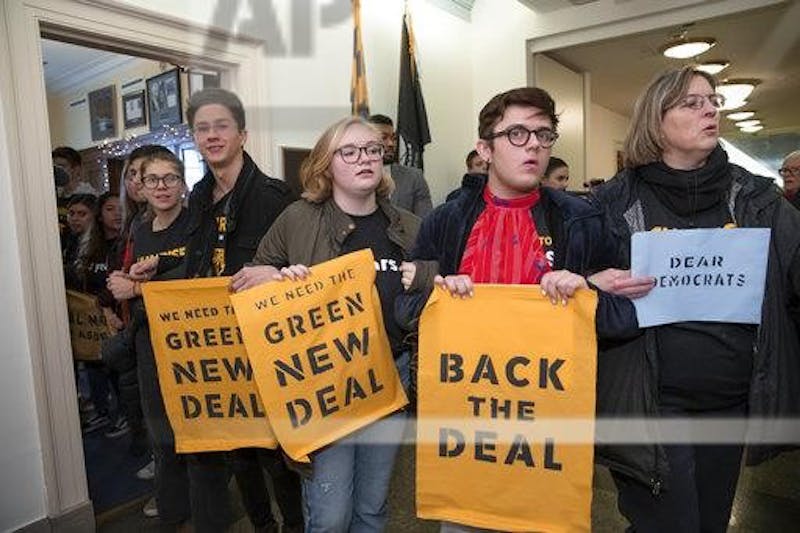 The Green New Deal: Bring it on

Copy of the second update issued by the EMU President