Ryan Brumfield races down the sideline during the Eagles' game against Northern Illinois.

For the first time in school history, the Eastern Michigan Eagles took on the Coastal Carolina Chanticleers at Brooks Stadium in Conway, South Carolina on Saturday, Aug. 31. Despite a slow start by the Eagles, they escaped with a 30-23 victory to begin their season with a 1-0 record.

The Chanticleers started off very quickly as head coach Jamey Chadwell had the Eastern Michigan defense off guard with various exotic looks. Whether it be with run-pass options, quick screens, or switching between two quarterbacks, the Eagles defense was unable to stop Coastal Carolina quarterback Fred Payton as he capped off the opening drive with a touchdown pass to Shadell Bell, a tight end who transferred from Clemson University.

The early tempo by the Chanticleers offense allowed Coastal Carolina to jump out to a 10-0 lead, leaving the Eagles dazed and confused. Eastern Michigan committed multiple offsides penalties throughout the early going of the game.

Head coach Chris Creighton was even forced to call two timeouts in the first quarter, as he did not like the formations that Chadwell and the Chanticleers were giving his defense. The Eagles would eventually adjust and senior defensive back Kevin McGill was a big part of that.

"As a cornerback you can press things up to give the defensive line more time to make a play in the backfield. Also when we press it’s easier to take away screen plays,” said Myles McNeal, who is committed to play for the Eagles in 2020. “He (McGill) did a great job. He positioned himself slightly on top of the receiver and once you do that you are the receiver now. So when the QB threw the ball he could high point it and game over. It also means that every play they will dominate the opponent and win their individual matchups until the game is done.”

Coastal Carolina quarterback Payton would have 304 yards through the air on 29 completions to his credit but the Eagles also baited him into throwing four interceptions. Eastern Michigan’s Brody Hoying, Blake Bogan, Clay Holford and McGill all intercepted passes, and Holford came just short of intercepting a second in the final minutes of the fourth quarter.

Offensively, the Eagles were led by Mike Glass III who had an astonishing 91% completion rate by connecting on 20 of his 22 passes for 188 yards and three touchdowns, including two to sophomore wide receiver, Dylan Drummond. Drummond also hauled in the first pass of the season from Glass III. The Chanticleers defense seemingly had no answers for the ground attack as Vann carried the football 22 times for 108 yards, at almost five yards per attempt.

The Eagles took great care of the football, turning it over just once on a fumble by Vann which bounced out of the end zone on what could have been a touchdown run. Despite holding the ball for over five minutes less during the contest and being out-gained by a total of 378 yards to 315, the Eagles came away with a one possession win. This is something that coach Creighton has put emphasis on this season, closing out games strongly. Eastern Michigan led the FBS in one possession games in 2018 with seven.

The Eagles will remain on the road next week, as the team will travel to Lexington to take on the Kentucky Wildcats of the SEC from Kroger Field as they look to continue their winning ways. Kentucky also started the season 1-0 with a victory over fellow MAC school Toledo, 38-24. Eastern Michigan and Kentucky have only met once before, as the Wildcats came away with a tight 24-20 win 2017.

“This win was pretty important. It’s a lot easier to get that momentum going with a win than a loss,” McNeal said. “Their defense is super good and intense. So just having the opportunity to play with a defense like that is the most exciting. I’m looking for them to have a fast start on offense, shut down Kentucky’s offense, and no penalties. I believe they’ll do it." 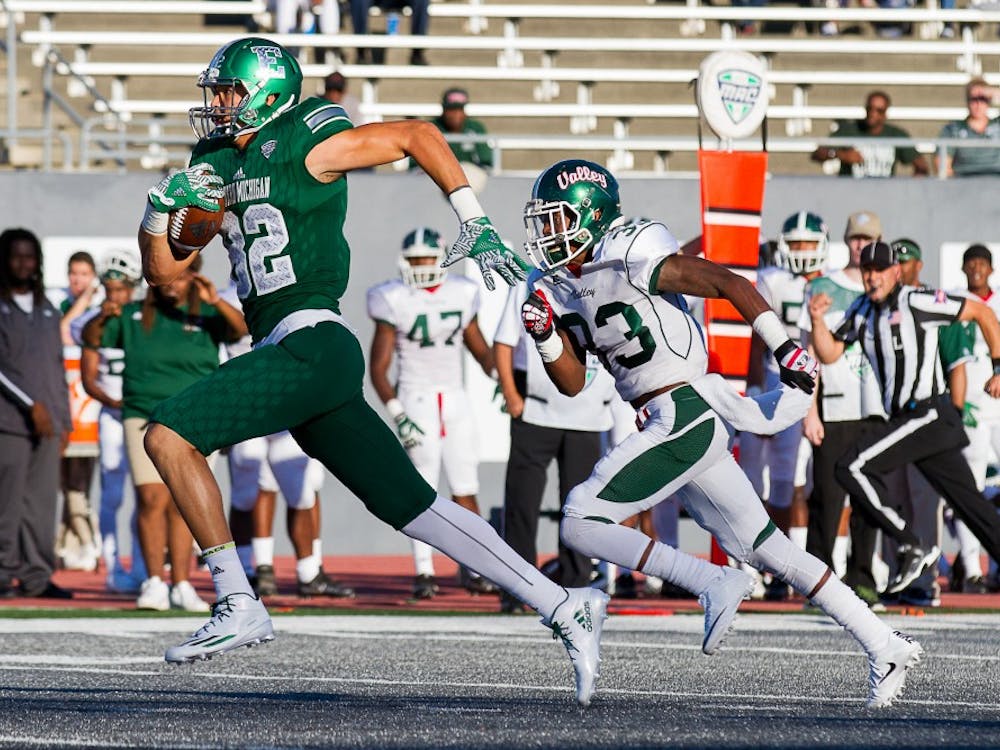