Eastern Michigan opens up its conference schedule with an in-state MAC battle.

With the bye week behind them, head coach Chris Creighton and the Eagles now set their sights on the Chippewas of Central Michigan. Eastern Michigan is looking to win its second straight game over the Chippewas after a 17-7 victory last season.

The bye week coming after the fourth game of the year was exactly the right time, according to Creighton.

“This has been perfect, absolutely perfect, for a multitude of reasons,” Creighton said. “Just the non-conference and the conference having four games to start the new season. It really worked well.”

Although the team is 3-1 on the field, the Eagles are still determined in the classroom. “Academically for our guys, the papers, the tests and the midterms are on their way,” Creighton said. “A chance to get away from football and to really hone in on that is ideal.”

Creighton feels that his team is very well prepared to open up their conference schedule. He said the team had some extra time during the bye week to watch Central Michigan’s previous games, and they started their initial game plan on that. The team made sure to watch Western Michigan’s 31-15 win over Central Michigan from last week.

Special teams was very crucial in the Eagles’ Week 4 victory over Central Connecticut State and it will be a main focus again this week, according to Creighton.

“One of the keys to the game is the hidden yards with special teams. All coaches and teams realize that. The better you can be at using those yards to your advantage is a really big deal over the course of the game. There are a lot more special teams plays in a game than most people realize.”

Defensively, the Eagles will be faced with the task of limiting the production of running back Jonathan Ward of the Chippewas. Ward is coming off a game in which he rushed for almost six yards per carry for 107 yards. The Eagles are aware of Ward’s talent and what he brings to the Central Michigan offense.

“From my perspective, I think it’s very important that we neutralize their running back, Jonathan Ward,” linebacker Terry Myrick said. “He brings a lot to the table; he has great balance, great vision, soft hands out of the backfield and nice quickness. I think that he’s a great back, so neutralizing him is the first thing for our defense.

We actually had a players-only meeting to just lay down the law and let each other know that we have each other’s back. As a locker room, we just want to come out firing on all cylinders.”

In Central Michigan’s loss to Western Michigan, the Chippewas tight end group had eight receptions that accounted for almost 25% of quarterback David Moore’s completions. Myrick was aware of this and knew what his linebacking core would have to do to keep the tight ends in check.

“From a man coverage perspective, maintaining leverage and eye discipline,” Myrick said. “When I’m in zone coverage, just getting my drops and helping out the other guys behind me, and communication. Communication is huge to it.”

The Eagles open as 6.5-point favorites on the road in Mount Pleasant. 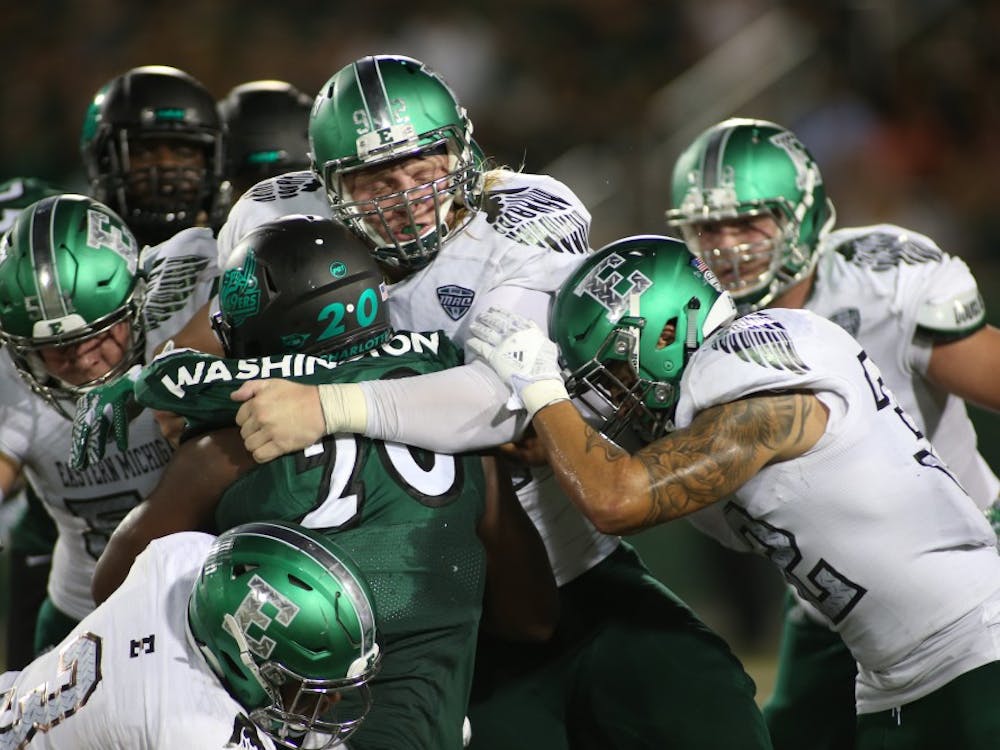 EMU picks up second win of the season in Charlotte