Student Government votes on a resolution regarding campus parking citations, EMU’s Jazz Ensemble holds a virtual concert, and an eco-friendly shop opens up in Dexter, Michigan.

Ronia Cabansag: On this week’s episode, EMU’s Student government voted on two resolutions, EMU’s Jazz Ensemble is persevering in the midst of COVID-19, and an environmentally friendly shop opens up in Dexter, Michigan. I’m Ronia Cabansag, sitting in for Liz Hornyak, and this is the Eastern Echo Podcast.

On Tuesday, March 23, Student Government met to vote on Resolutions 107-06 and 107-7. Resolution 107-06 was written by Senator Jeffrey Hoang and is intended to create an open dialogue between Student Government and LAZ Parking/Park EMU, to discuss students and staff getting an electronic confirmation when given a citation.

Currently, LAZ Parking/Park EMU hands out paper citations by putting them on the windshields of vehicles. With this method, students and staff might go days without knowing they have a ticket that needs to be paid.

On Thursday, March 25, EMU’s Jazz Ensemble streamed a live concert from the Alexander Music Building. The concert had 180 viewers and six pieces were performed. Both instrumentalists and the vocalists wore masks and were socially distanced during their performance.

To prepare for the concert, Jazz Ensemble Directors Donald Babcock and Geoffrey Stanton had to conduct virtual auditions. For rehearsals, masks are required, members of the ensemble practice social distancing, and students who play wind instruments are only allowed to practice for 35 minutes. Even though the ensemble has to adjust to a shorter rehearsal time and a virtual setting, Babcock states that the group is still having a lot of fun.

Donald Babcock: It’s been a bit of a challenge. Normally we get in two concerts a semester, so this semester and last we delayed the concert a little bit so that we had time to work on our pieces before we performed. But the quality is still there, it’s still a great group, we’re still having fun, and we’ve been able to make it work.

Cabansag: Bee Joyful Zero Waste and Refill Shop opened its second location in Dexter Michigan on Friday, April 2. This franchise was started by Jessica Thompson, who first created reusable bags to reduce plastic waste in her own home in 2017. The store offers not only reusable bags, but laundry detergent, shampoo, conditioner, and a refill station so that customers can come back and continue to buy green.

“I just hope that people are able to see that these opportunities are out there,“ Thompson said. “That they don’t have to shop what they’ve always shopped that hopefully they’re able to come in and see a new way of thinking and we’re able to kind of encourage them to make these changes and even if they come in and don’t purchase anything maybe they’re just inspired to do something different at their house.”

Bee Joyful Zero Waste and Refill Shop is located on 3203 Broad Street, Dexter, Michigan, and is open for both in-person and curbside pick up. To view products online you can go to www.beejoyfulshop.com 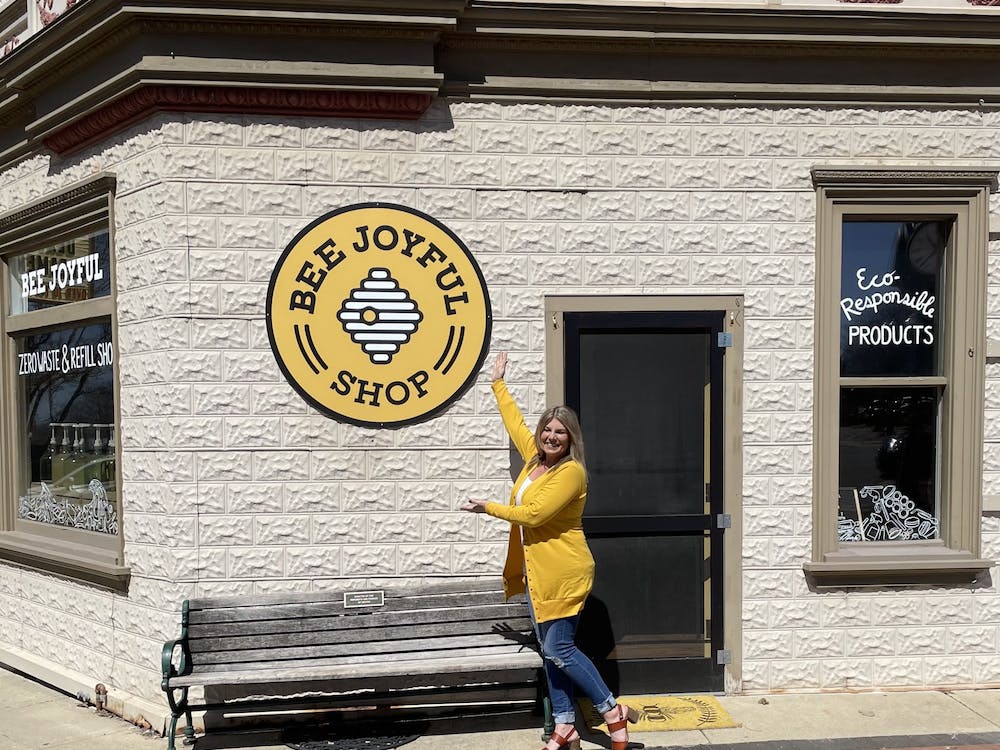