Eagles clinch berth in MAC championship with win over No. 1 seed

By Theodora Robinson-Jones
Jakob Skogheim and Jakob Skogheim
Senior guard Cassie Schrock playing defense in the Eagles' 85-40 rout of Ohio University. Schrock had a team-high eight rebounds, all coming on the defensive end.

After connecting on seven of its eight free throws in the final 1:08 of the Mid-American Conference tournament semifinals, the Eastern Michigan University women’s basketball team defeated the No.1-seeded University of Toledo, 61-55, Friday to advance to the MAC Championship game.

The Rockets ended their season with a 23-8 record and a MAC regular-season championship title. The Eagles advance their record to 22-11 overall.

The Eagles hit the court at 1 p.m. Saturday for the MAC championship game at the Quicken Loans Arena in Cleveland. They will face off with Bowling Green State University, the only team in the MAC that EMU coach AnnMarie Gilbert has yet to beat.

It will be the Eagles’ second appearance in a MAC championship game. Their first was a win over BGSU for the championship in 2004.

Friday, the Eagles were led by Cassie Schrock with 20 points, five rebounds and three assists. Paige Redditt was named the player of the game after turning in her fourth double-double with 18 points and 11 rebounds. Sydney Huntley-Rodgers added 11 points while Kristin Thomas grabbed 10 rebounds.

The game opened with each team having trouble getting their offenses going. A combination of Rocket turnovers and EMU making 71 percent of its free throws allowed the Eagles to get off to a 13-4 lead with 12:51 remaining in the opening half.

The Rockets started to cut into the lead slowly, coming as close as three points away from the Eagles. However, a layup by Redditt sparked a 10-0 run by the Eagles as they took a 13-point, 27-14, lead with 2:45 in the half. UT scored the last five points of the half and went into the locker room trailing 27-19.

The Eagles came out of the break and still capitalized on the Rockets, continuing to lead by as many as 13 with 13:30 to play. The Rockets would then go on a 12-2 run to pull them back within five of the Eagles.

The teams exchanged baskets after that point, and the score remained close.

With 4:30 to go the Eagles found themselves up by seven, 54-47, but a triple by Courtney Ingersoll cut that lead to just four. Both teams went through a drought, and neither scored in the next three minutes until Redditt was sent to the free-throw line, where she connected on both shots, finishing the game 4-for-4 from the charity stripe.

After that, a triple by Goodall put the Rockets back within three points of the Eagles and forced a UT timeout. Coming out of the timeout the Rockets sent Schrock back to the line and she connected on both free-throws. Schrock also finished the night 100 percent, 8-for-8, from the free-throw line.

A missed layup by Shafir turned into another trip to the charity stripe for the Eagles, this time it was James on the hot seat and she made both of her two attempts. The Rockets would make one last trip down the court where Shafir missed two attempts at a triple and James grabbed the rebound, holding it for the final seconds of the game as the Eagles pulled away with a 61-55 victory.

Goodall paced the Rockets as she posted a double-double with 18 points and 10 rebounds.

Visit EasternEcho.com tomorrow after the championship game for results, or follow The Echo’s Sports Page on Twitter, @Echo_sportspage, for play-by-play updates starting at tipoff. 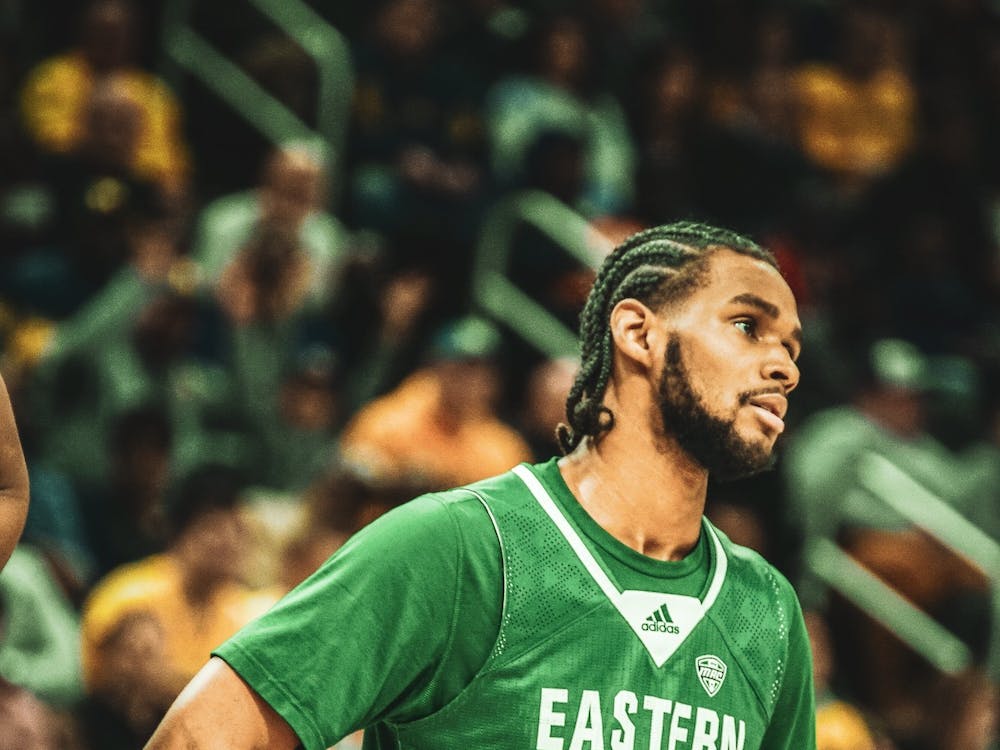