This series, inspired by Vox, emphasizes the strengths of each candidate pairing. This is not an endorsement.

This is the second article in a series covering the candidates for EMU student body president and vice president. As such, this is not an endorsement by the Echo editorial staff.

Campaigns for student body president and vice president have been in full swing since Winter Recess and throughout the COVID-19 response. One of the candidate pairings is Jack Swartzinski and Allanah Morales, current Parliamentarian of the Student Senate and Student Government Director of Student Services, respectively.

I met with Swartzinski at the start of the winter break at Wurst Bar, and we talked for about 45 minutes about his plans for the campaign and, if successful, his time in office.

Swartzinski is in junior standing studying political science and public administration. In addition to his role in Student Government, he is on Mock Trial and Moot Court, as well as Catholics on Campus.

He believes these roles make him more thoughtful and diligent, especially with the rigor involved with Mock Trial and Moot Court. He also believes that his role with Catholics on Campus and Campus Life job in student services connect him to the greater Ypsilanti community.

I connected with Morales via email. She has been involved in many things on and off campus, with the most pertinent being President of the Latinx Student Association, Parliamentarian of Sigma Gamma Rho Sorority, Inc., and Director of Student Services in EMU Student Government. She has also served on panels for leadership and diversity and participates in mentorship programs like the VISION Volunteer Center’s pen pal program. Additionally, she is part of the Community Leaders Program for Google LLC., where she works with small/family-owned local businesses to promote better digital literacy.

Morales says that she is so involved because her top priority is helping others, and as a first generation college student of color from a single-parent household, she focuses substantial time and energy into helping students and community members marginalized for their identities or socioeconomic status.

Swartzinski and Morales diagnose much of Eastern’s problems as issues of accountability, transparency and awareness. They find that there are many campus resources, but they aren’t readily available. Not only, then, would they seek to expand student resources, but also shine a light on those which already exist but aren’t getting enough exposure.

Doing this means relationship-building with faculty and administration to create legitimacy and respect for themselves as advocates for the student body. Building that respect, Swartzinski explains, is paramount to making sure entities like ParkEMU, a housing public-private partnership, and the general campus administration are working with student interests at the forefront.

Swartzinski finds a lot of untapped potential in Eastern Michigan University as a working-class school with incredible faculty and unmatched diversity.

“There are times I wish I was in a tweed coat, smoking a pipe and talking to people about political theory or high philosophies, but I wouldn’t get the opportunity at those other Universities to talk about the problems of Inkster or Flint in the same real-life manner. EMU offers real doses of political philosophy that you can’t get from other Michigan universities in the same way,“ Swartzinski explains.

Morales believes we should set an example for other universities in how we manage conflict, especially when it comes to issues with hate speech and racial insensitivity. She uses some of her training in Diversity and Community Involvement to highlight that we need to focus on understanding, evaluating, and educating when situations like that arise, placing an emphasis on the communities affected by such actions.

“It is contradictory to run an entire campus platform based on the concept of ‘you’re welcome here’ but not having the proper resources & support to make students truly feel welcome,” she said.

Some more specific action items on the Swartzinski-Morales agenda include expanding outreach to schools in Detroit and to first-generation students, reevaluating our Physical Plant operations to ensure work orders are completed swiftly, sidewalks are salted, and recyclables are actually recycled, and connecting to community health centers like Corner Health to provide students with free STD/STI testing.

The point of politics is to make the community better,” Swartzinski said.

The final question I asked each candidate was “who do you look up to in terms of leadership?” For on-campus figures, Swartzinski referenced Dr. Barry Pyle for his steady leadership as a professor and through the programs Mock Trial and Moot Court, while Morales referenced Steve Bryant, Director of Diversity and Community Involvement, for his emphasis on empathy and listening to understand rather than reply. They each also mentioned their mothers, for either sparking their interest in politics or showing strength and leadership in hard times growing up.

Swartzinski and Morales have strong appeal in their campaign in their leadership experience, knowledge of campus structures and resources, and the serious manner in which they conduct themselves. Their slogan “Trusted Student Leadership” rings true. Swartzinski emphasizes steady yet flexible leadership in ever-changing times and Morales knows the pulse of the university in its student services. They each stress relationship-building as key to providing students with the support and resources they require for success.

For those looking for steady student leadership in turbulent times who stress accountability and community-building, Jack Swartzinski and Allanah Morales may be a good choice for you.

They recently held a "Digital Town Hall" on Instagram, and they stress accountability and transparency with the student body now more than ever. For more information on their campaign, consult their Facebook page.

Finally, look out for the other candidates in this series, research them intently, and remember to vote in the March 25-26 election via your MyEmich accounts. 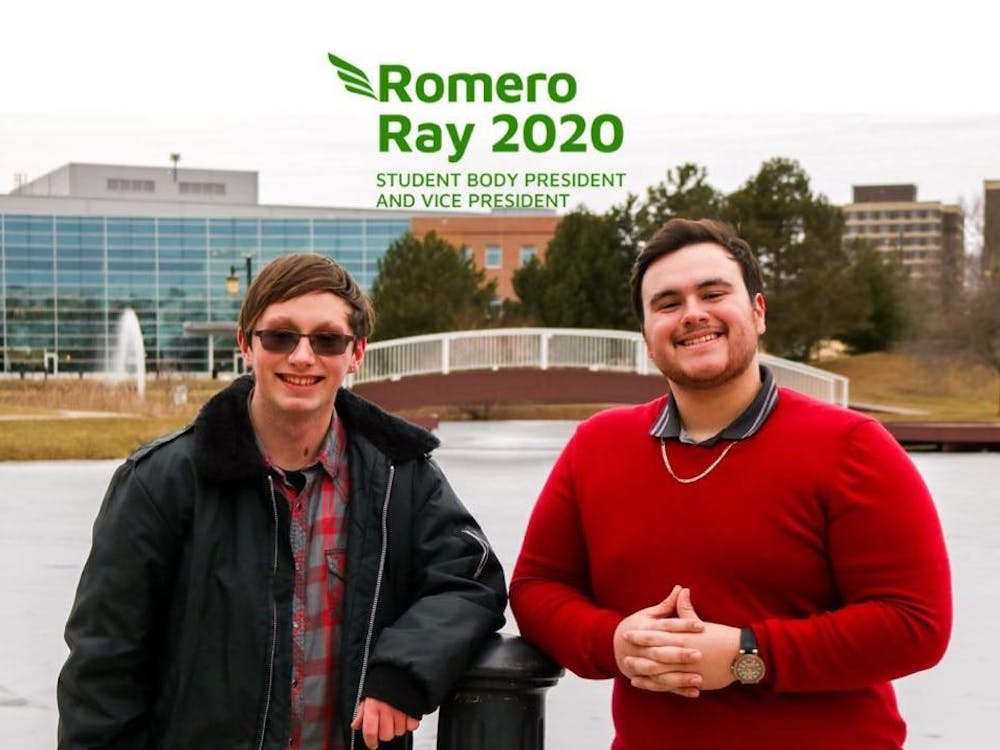