Liz Hornyak: On today’s episode, alumni of an EMU sorority strip their letters to demand action from the national organization. In city news, members of the local community call on the mayor of Ypsilanti to resign, and one local mother finds a way to provide for her community during the coronavirus pandemic.

Alumni of EMU’s Delta Alpha chapter of the organization have stripped their letters to express their dissatisfaction with SDT’s response. One of those alumni, Savannah Gariepy, released a document listing specific demands addressed to the SDT National Board of Directors. SDT has since appointed Victoria Alexander to the newly established Diversity, Equity, and Inclusion Committee.

Another graduated member, Cindy Anim-Gyan, said in a statement to the Eastern Echo, “Never in my life before joining Sigma Delta Tau, have I had a friend base and support system that was so fearless and progressive that they were willing to post and say things they know would cause tension and uproars within their families and friendships. Even though I may not always be proud of Sigma Delta Tau’s words and actions, I am forever proud of my sisters.”

Gariepy also urged members of sororities under the National Panhellenic Conference  to “place pressure” on their national organizations and “do more than release a generalized statement.”

The NPC, for those who aren’t familiar, is an umbrella organization for sororities globally. Many EMU sororities, including SDT, fall under this umbrella. The NPC has issued multiple statements and resources concerning racial inequity. You can find the statements we mentioned today linked on our website.

Many members of the Ypsilanti community are calling for Mayor Beth Bashert to resign. This is in response to a racial comment she made during a city council meeting on Tuesday, June 16.

During a vote concerning the reappointment of city human relations commissioner Ka’Ron Gaines, Bashert said, “Since I will be crucified if I vote against any Black person on any commission, I'm going to vote yes.”

Other council members criticized her statement, and all members aside from Bashert voted no. Later in the meeting, Council Member Nicole Brown asked Bashert to apologize. Bashert brushed the discussion aside, saying, “Thank you, I will consider your comment.” She took to Facebook with an apology the following day.

Bashert alluded to the incident during a virtual town hall forum that was held last Thursday. The event was intended to create space for the community to speak directly with city leadership. At the start of the meeting, Mayor Bashert stated, “Due to recent events. I’m going to take a backseat roll in this meeting.”

During the same meeting, Police chief Tony DeGiusti commented on the city council’s decision to set aside funds for a social worker in the police department. He believes a social worker would be better suited to answer some of the calls the department receives regularly . Some expressed concern over the plan, saying social workers should instead be part of a separate organization.

Later in the evening, Heather Freeling, a member of the Police Advisory Commission, voiced her support for defunding the police.

She said, “What that really means is moving away from the stunted conception of what public safety looks like. Investing in mental health, housing services, and other community-based organizations, and not just law enforcement.”

Mayor Bashert provided a Zoom meeting link to a joint Police Advisory Commission and City Council meeting set for Tuesday, June 23. Part of the meeting is reserved for public comment, where individuals will have three minutes each to present their statements. You can find that link on our website.

In other news, Ypsilanti resident Tosha Estermyer has stepped up to serve members of the local community. The coronavirus pandemic has forced thousands of Washtenaw County residents out of work. In response, Estermyer set up a ‘no questions asked’ community pantry. Six different tables that sit at the end of her driveway are filled with food, cleaning supplies, and toiletries that have largely been provided by the community.

Estermyer said in an interview with the Echo, "The community support has been phenomenal in terms of keeping it going . . . people drop off food daily; not a day has gone by where someone hasn't dropped off at least a couple boxes of food. It's been a mixed venture of people dropping things off and people giving us monetary donations for us to go purchase items that go the fastest."

Estemyer says she and her seven children help to stock and sort the table. The pantry is available every day, and she plans to continue setting it up indefinitely. Anyone is welcome to donate or pick up non-perishable food or other items. Monetary donations are also welcome to be dropped off or delivered. The pantry is located at 5981 Big Pine Drive. 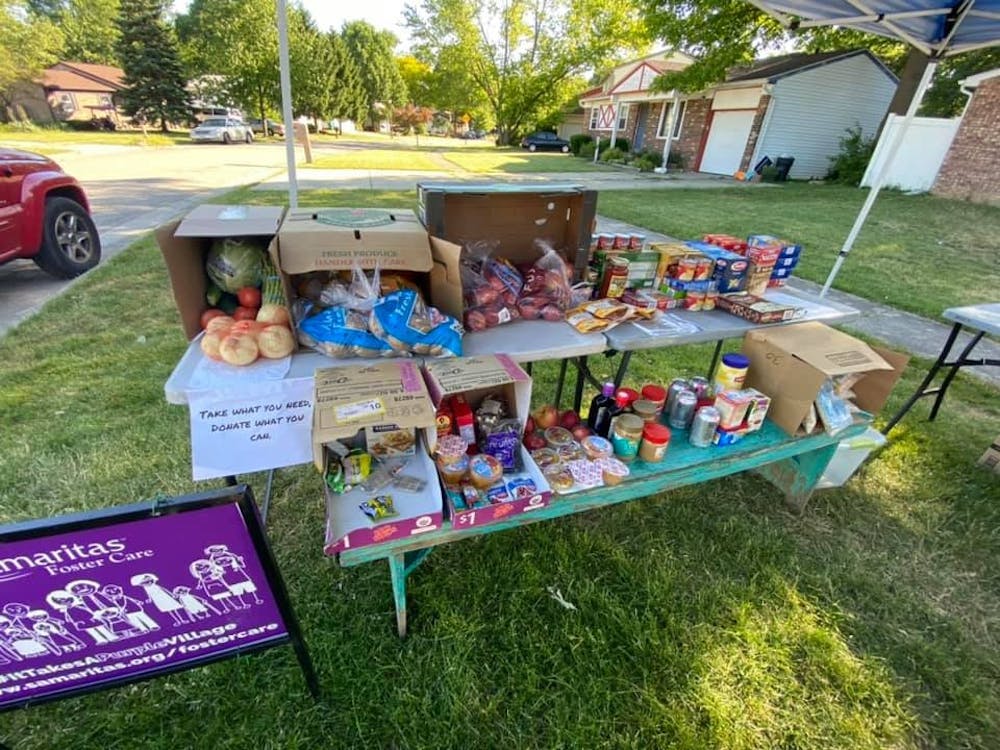