EMU students protest in front of multiple fraternity houses, calling for action against Greek life and sexual assault at EMU following Alpha Sigma Phi’s decision to disassociate from the University despite their ongoing involvement in the Title IX lawsu

Shortly after EMU’s President James Smith’s announcement that Alpha Sigma Phi had decided to disassociate from the University, a flyer calling for a protest appeared to circulate on social media.

Students marched across campus to various fraternities on Oct. 19, such as Alpha Sigma Phi and Delta Tau Delta, chanting “end rape culture” and “enough is enough” and other slogans of similar outcry.

S.A.R.A. at EMU have previously organized a protest on Sept. 16, protesting Greek life and sexual assault, along with calling for the University to hold the fraternities accountable in ongoing Title IX lawsuits that ASP and DTD are both listed in.

Many students were left feeling frustrated with the fraternity’s decision to withdraw their association with the University.

“I think it really confirms their guilt, and I think it was the easy way to get out for them [ASP],” EMU freshman Taylor Malpass said.

Earlier this week, the Alpha Sigma Phi - Gamma Upsilon Chapter took to their Instagram page to address the allegations made against the fraternity regarding their decision to disassociate from EMU.

“While you may see quotes that were a robust framework for this [review] process, the truth is this process was recently developed in order to make our Chapter the public scapegoat for their failures,” according to a written statement on their Instagram.

“This continuous neglect and creation of a kangaroo court forced us to make the decision to disaffiliate with the University in fear of being tried and punished for actions that we did not commit.”

Despite multiple public statements in which ASP explains their reasoning for ending their association with EMU, many students are still skeptical about the intent behind the fraternity’s decision.

“They posted stuff on social media being like ‘we’ve supported victims so much.’ No, no, they haven’t,” Hannah Berberoglu, a high school junior part of EMU’s Early College Alliance program, said. “They don’t want to take accountability. And we’re here to show them that they’re going to whether they want to or not.”

These initiatives include a mandatory student Title IX training, in which students expected to attend classes in the following winter semester will not be permitted to register for classes until the training is completed.

The training consists of a series of educational videos that discuss topics such as the rights and protections of students under Title IX, prohibited conduct under the school’s Title IX policy, the role of bystander intervention, and other practical guidance aimed to prevent harassment and sex-based discrimination. Following the videos, students must complete a quiz for each topic to finish their online Title IX training.

In addition, the University will be working on developing a Survivor’s Handbook that will be distributed to all students once it is completed. The Handbook will feature support services and resource materials for survivors of sexual assault.

“I think it was definitely a step in the right direction. However, it was rushed,” Berberoglu said.

Berberoglu points out that EMU has allegedly taken a stance on pressuring people who could be potentially victimized instead of individuals who instigate the abuse.

EMU believes that the mandatory training is a step forward because it addresses their Title IX Policy, a question raised by students during the recent protest in September, according to Melissa Thrasher, Director of Media Relations at EMU, said.

"The training is also reflective of our core values, which promotes a culture of respect and accountability for our actions and behaviors,“ Thrasher said in an email. "We strongly believe that this educational component will help promote a safe and caring environment among our student population."

Students were not the only ones in attendance of the protest. A handful of faculty members were also present.

“[I’m here] because I’m very concerned about rape culture on university campuses, and especially ours,” Christine Neufeld, EMU professor in the English department of 18 years, said.

“I care very much about our students and I am here to support the survivors, and to support young people who are standing up for what is right.”

ASP’s decision to withdraw its association with the University has led to quite a bit of discourse in the community.

“It’s a complicated situation,” Neufeld said. “I worry about the fact that a fraternity that is disassociated can still continue to perpetuate violence if people continue to participate in their fraternity as well as engage with them.”

“It’s a scary thing to know that there is even less surveillance. We’re in a situation where, obviously, there’s a lot of work to be done to educate people about rape culture, and to make sure that people engage with each other in respectful ways,” Neufeld said. 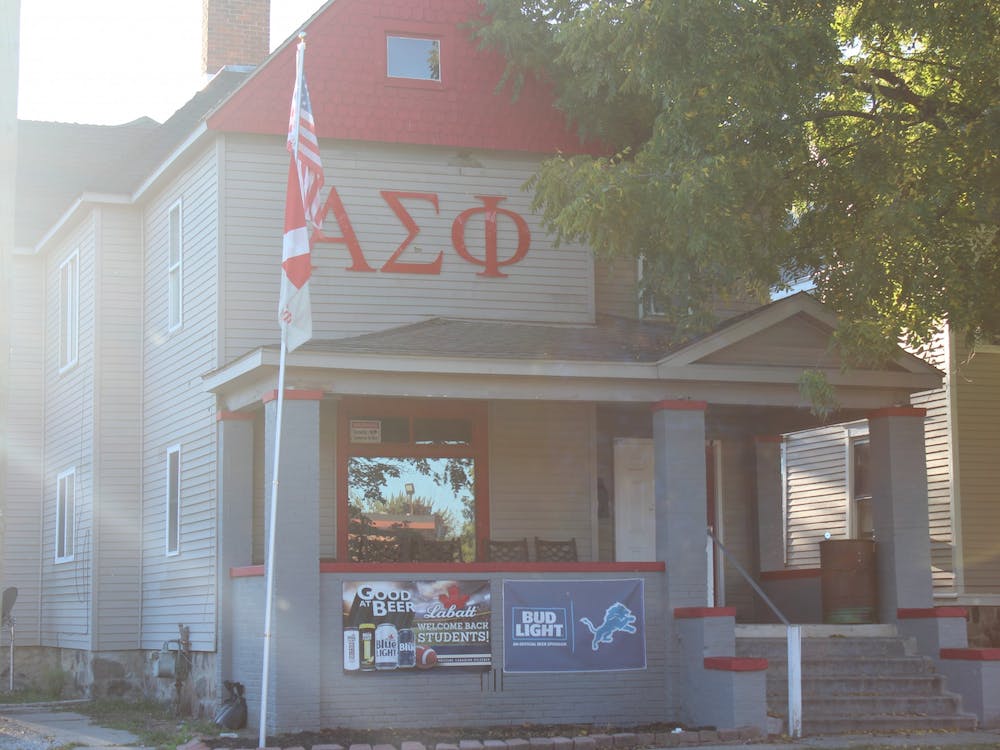