“I am most pleased with the overall growth and development of this team,” EMU coach AnnMarie Gilbert said. “This team is due, and our goal is to be in the NCAA Tournament. There is some type of magic in this team.”

The Eagles needed a victory over the Broncos and for Akron to defeat Kent State University in order to come out with a by week and head straight to the second round of the tournament. Since KSU was able to come back and beat Akron, the Eagles will play in the first round of the tournament 4:30 p.m. Saturday at home against the Miami RedHawks.

If the Eagles defeat Miami (Ohio) they will move onto face KSU at the host sight of the MAC Tournament in Cleveland.

“We feel good,” Wills said. “We can polish some things up in practice but we know that we can play with the best teams in the MAC and we’re confident that we will win.”

EMU had four players in double digits Wednesday as Huntley-Rodgers led the way with 17 points, seven rebounds and three steals.

For the Broncos, Miame Giden led all scorers in the game with 19 points while Ebony Cleary and Aurielle Anderson combined for 16 points. Breanna Banktson led the Broncos’ defensive efforts, recording seven rebounds.

“I was excited and sad, I just felt a mix of emotions,” Thomas said. “It was a good moment and a sad moment because I knew that it would be one of the last times I suit up with this team.”

Spencer, who tore her ACL earlier this season and is inactive, was confident in the seniors who could play.

“I was confident they would win and that the seniors would play well,” Spencer said. “It wasn’t until after the game that it really hit me.”

To open the game, Gilbert switched up the Eagles’ starting lineup giving each of the seniors a chance to start in their final regular-season game of their collegiate careers.

The Eagles struck first with a three-pointer by Schrock after a rebound by Johnson off of a miss from the Broncos. Taylor Manley responded with a triple for WMU.

The teams exchanged baskets and the lead in the next 10 minutes of action until a triple by James put the Eagles within one of the Broncos with 8:03 left in the first half.

EMU scored 13 unanswered points before a layup by Giden with 3:45 remaining snapped the Broncos’ drought. The Eagles continued their offensive drive while also holding the Broncos to just six more points in the remainder of the first half and went into the break with a 40-29 lead over WMU.

“The seniors came out with a lot of intensity and chemistry,” India Hairston said. “They really set the tone of the game and the defensive pressure was also there.”

The Eagles finished with a 51.6 field goal percentage, going 32-for-62 from the field and connected on six triple, four of which came from James and Huntley-Rodgers. They also finished 10-for-18 from the free-throw line.

Coming out of the locker room, the Eagles held on to their lead and didn’t look back as they connected on 17 of their 32 field goal attempts in the second half. The Broncos managed to cut the Eagles’ lead down to nine with 15:19 left to play, however, that was as close as they would get.

EMU held the Broncos to just 27 points in the second half, while they drained 40 points. Gilbert gave her senior lineup one last shot at the hardwood until a steal by Wills was thrown behind her head up court to Huntley-Rodgers who finished the transitional play with a layup.

Gilbert then allowed the reserves to take control, however, she left Wills on the floor until she drained a triple, her only points of the night, with 1:58 to play.

“Senior leadership.” Gilbert said when asked what won the game for the Eagles. “We played our tails off and our defense was really on point. Sydney Huntley-Rodgers was just fierce.”

The Eagles’ first-round MAC Tournament game will follow the EMU men’s team’s senior night game against the University of Toledo Saturday at the Convocation Center. 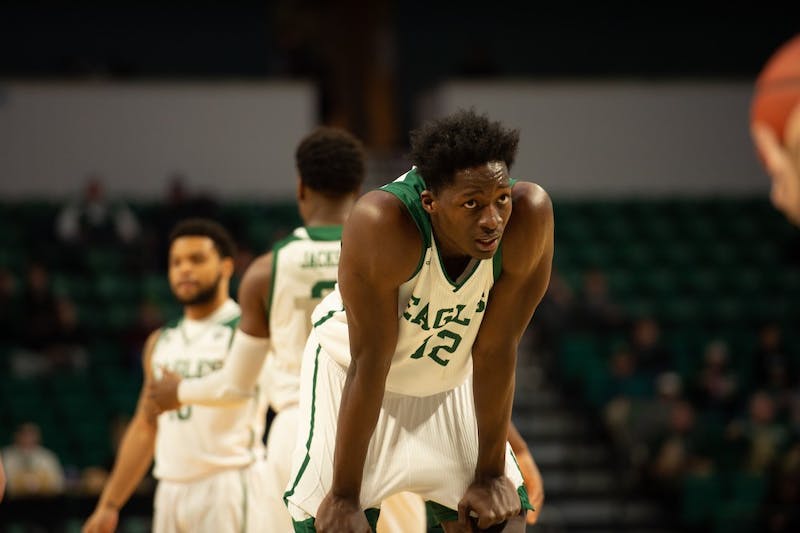