After making 31 kills in her team’s two weekend matches, Eastern Michigan University junior outside hitter, Stacey Perinar, was selected as the Eastern Echo’s Eagle of the Week.

She now has 122 kills this season – most on the team and fourth in the Mid-American Conference by number, but eighth by average.

The Eagles (14-10, 5-5 MAC) got off to a good start, but struggled during the middle of conference play. The team lost its first five matches of October – all against MAC opponents. Eastern has righted the ship and is on a three match winning streak.

“We’re playing more as a unit instead of six individuals on the court which is great,” Perinar said.

The junior started playing volleyball in elementary school and has been playing ever since.

She played volleyball and softball until she was in eighth grade, when she made the decision to stick with volleyball after her volleyball coach made her choose between the two.

“I broke my dad’s heart because he really wanted me to be a softball player,” Perinar said. “I’m really glad I chose volleyball. I started playing club volleyball when I was 12 years old and made the elite team. We went to junior nationals every single year. I played all the way up until 18’s. I got recruited when I was 16 years old. [EMU] was my first visit and I fell in love with the school, the staff and the girls and I chose to come to Eastern and signed my junior year.”

She said one of the things she likes most about Eastern is its size, especially in the winter months – which are fast approaching.

“It’s been a great experience for me,” Perinar said. “It’s not a huge school and to walk to the edge of campus in 15 minutes is nice because [when] it’s so cold up here, you don’t want to be walking 45 minutes to class like you would at Michigan or something.”

As a freshman, Perinar did more learning than she did playing – something she said she appreciates.

“I didn’t really play much my freshman year and I’m kind of glad I didn’t,” Perinar said. “It was a good learning experience – kind of like a wake-up call from club to [college] volleyball. In Division I sports, everyone’s good [unlike] in high school there’s that one girl that’s really good. Everyone in Division I volleyball holds a pretty high standard for their skills, their talent and everything.”

Perinar said one of her former teammates – graduated outside hitter Rachel Iaquaniello – taught her the most on the court at that time.

“She’s super nice,” Perinar said. “[EMU coach Berrington] always said ‘Watch Rachel, watch Rachel.’ She was all-MAC, was just a stud volleyball player. I learned a lot of things from her by watching her and trying to do reps to learn to hit high like she does.”

Iaquaniello said Perinar did well as a freshman.

“I just remember when she would get the opportunity to go into games, that she would make smart decisions,” Iaquaniello said in a phone interview. “She didn’t always make those ‘freshman mistakes’ that I feel like I made [when I was a freshman]. She had a really nice little roll shot in the middle of the court that I don’t even think I could accomplish as a senior. I think she had those volleyball smarts, I guess you could say.”

Perinar said last season she moved around the court more and learned a lot by doing it.

Making the Mid-American Conference tournament last season was also a major moment for the junior – especially when many people didn’t expect the team to do so well. It made the tournament as a 6-seed, ultimately falling to Ohio University in the semifinals.

“We weren’t even expected to make the tournament,” Perinar said. “It’s something I’ll remember for a lifetime.”

Perinar said she likes to spend time with her roommates – five of her teammates. She also relates with many college students.

She said she likes to spend time with her fellow student-athletes.

“It’s nice to have an Eagle family,” Perinar said. “All the Eastern sports get along really well and we hang out a lot.”

She’s also close with her family and is the oldest of five siblings – two of which are twins.

“They’re [the twins] are freshmen in college this year,” Perinar said. “It’s nice to talk about their college experiences with them and what’s happening at their schools.”

Off the court, Iaquaniello said the junior was a loyal friend.

“She’s a really good friend to have,” Iaquaniello said. “She’s always on your side when you need her.”

Perinar had one request for the EMU student body – to come to the team’s game Thursday at 7 p.m. against Central Michigan University at the Convocation Center.

“It’s Eagles Unite so all the athletes are required to be there,” Perinar said. “It’d be nice to have more student fans there even though the Convo’s kind of a drive from campus which is unfortunate.” 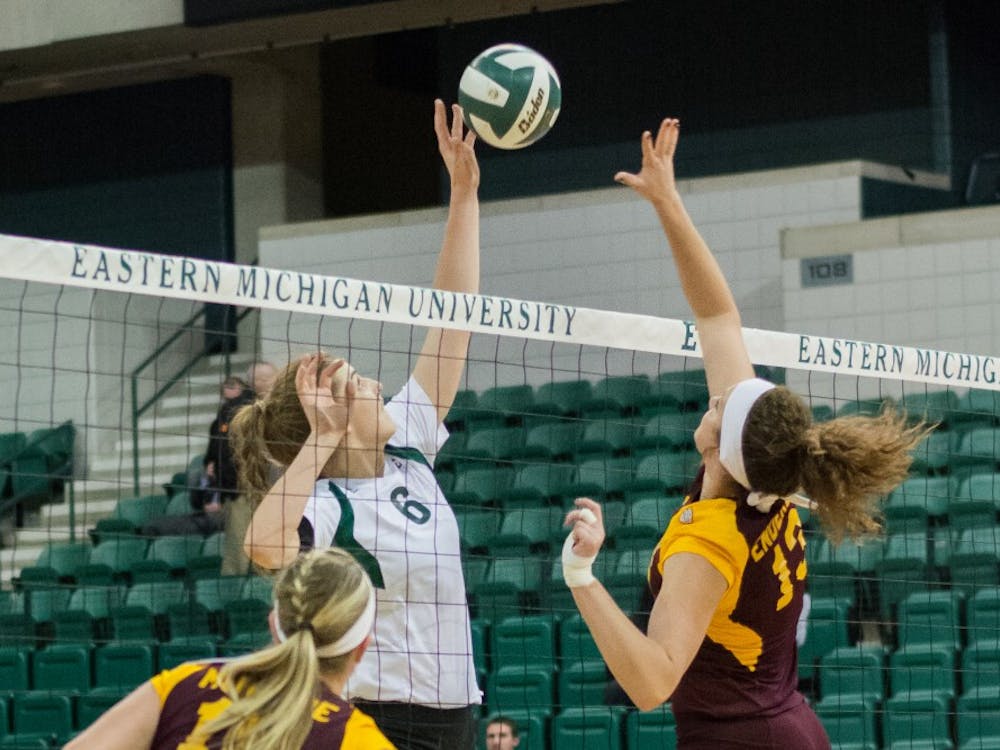