In the road matchup with the Gardner Webb Runnin’ Bulldogs the Eagles came out slow, finding themselves down 14-0. The Eagles hit the floor and went on to miss the first seven shots of the ball game leading to the deficit. Senior Willie Mangum IV finally got the Eagles on the board with a corner three and from here went on to lead the Eagles the rest of the way. To combat the deficit, Mangum and junior guard Tim Bond put together nine points on three three pointers. This sparked a 13-0 run that eventually grew into a 21-6 run in the Eagles favor. This put the Eagles in the lead 24-21 with just over seven minutes left in the first half, a position they never looked back from. From here, the Eagles continued to stretch their lead. Mangum started off the game draining his first seven attempts with five of them coming from beyond the arc. Mangum set a new personal record for three point field goals made with six. Alongside Mangum, we saw strong performances from sophomore James Thompson IV who contributed a double double with 15 points and 12 rebounds. The team also played outstanding on the defensive end. The Eagles dominated the turnover battle, getting twice as many steals as they had turnovers. Senior Ty Toney snatched five steals in the 78-68 victory for the Eagles.

The following Saturday the Eagles found themselves still in Indiana for another road matchup, this time against Indiana University Purdue University Indianapolis. Unlike the prior game, the Eagles were not as successful. Despite a strong performance in the takeaway department, the Eagles could not compete with IUPUI’s shooting performance. The Jaguars shot 47% from the floor while the Eagles put together a 38% performance for the evening. James Thompson IV went on to post another double double, this time with 14 points and 11 rebounds. Ray Lee lead the team in points with 20 but the Eagles could not keep up with IUPUI’s shooting that evening. The Eagles eventually went on to lose the match 83-71.

James Thompson IV was named to the 2K Classic Sub-regional All-Tournament Team for his solid performances throughout the four matches. The Eagles will now head home for a Wednesday night matchup against Madonna University on November 23rd. Tip off is scheduled for 2 pm in the Convocation Center. 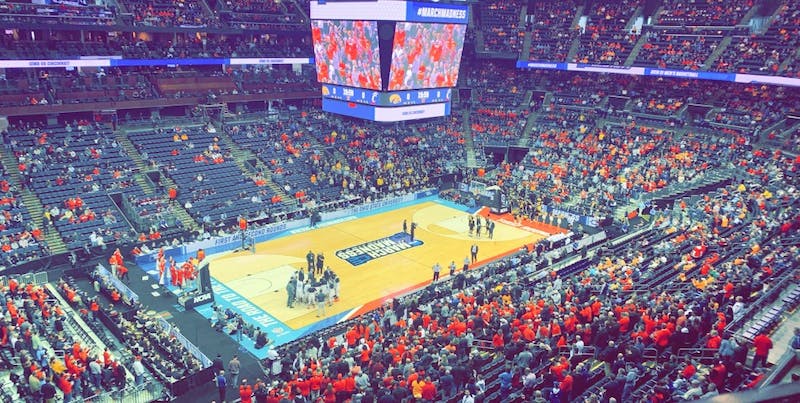