Using one of the most popular fictional nursery rhymes in horror cinema, writer/director Wes Craven returns to the darkest realms of Elm Street in the last chapter of the original “Nightmare on Elm Street” series with “New Nightmare.” The film reunites the original cast members from the first “Nightmare” film: Robert Englund, Heather Langenkamp and John Saxon.

The film opens with a revisiting of the original sequence from the first film—the creation of Freddy’s glove. After the viewer witnesses the construction of one of the most intimidating slasher weapons to ever bloody the silver screen, a unique twist is revealed.

Hiding behind the madness that is portrayed in the foreground, the viewers’ eyes are drawn to the background where crew members, special effects technicians, makeup artists, camera men and Craven himself are constructing the new Freddy Kruger film. This installment to the “Nightmare” series is the most unique and
realistic segment of the original seven films.

Torn between her work and family, Heather Langenkamp, who portrayed Nancy in the first and third “Nightmare” films, revisits the origins of her character as art imitates life after the success of the original “Nightmare on Elm Street.” When Langenkamp’s husband, Chase Porter (Newsom), one of the main special effects technicians that worked on the first film, is brutally murdered by an unknown assailant, her life begins to spiral downwards.

Following her husband’s funeral, Langenkamp’s son Dylan (Hughes) becomes mildly comatose and traumatized, stating that someone is after him in his dreams. Fearing for the sanity of her son, Langenkamp seeks assistance from those around her.

Her own paranoia deepens when mysterious phone calls and cryptic messages start appearing. What looks like a crazed stalker becomes more than just an obsessed fan. During the night, realistic, intense nightmares of the dream stalker himself keep her from being able to sleep, and she can’t shake the dream-state psychosis.

Langenkamp begins to fear that something is out of place.
Trying to put the missing pieces together, Langenkamp investigates the clues that link everyone involved with the production of the first “Nightmare” film. Apparently, Langenkamp and her son aren’t the only ones who are experiencing paranormal activity in this abstract situation.

Craven, Englund, “Nightmare” producer and Detroit native Robert Shaye and John Saxon are all pawns to this twisted scenario. There has to be a reason why all of this is happening.

There are actually two scenes that tie this whole story together and both involve solid performances by Craven, Englund and Langenkamp. The first scene starts with a phone call from Langenkamp to Englund. The conversation starts off casually then escalates into the soul of the picture.

Langenkamp asks, “Have you seen the script to the sequel by any chance?” Englund responds with, “No. Wes won’t show it until he’s finished. I asked him how far along he was, and he said, ‘As far as Dylan trying to reach God.’” Langenkamp’s reaction becomes chilled as she remembers an earlier incident at the park.

In a previous scene, Langenkamp and Saxon were conversing when Dylan once again goes into his comatose trance. He climbs to the top of a high jungle gym where he slips and falls to the ground. When both rush over to see if he’s all right, Dylan responds in a monotone voice, “God wouldn’t take me.” After putting two and two together, Langenkamp travels to the hills of Malibu, Calif., to visit Craven.

The second scene, which comes very late in the film, reveals the haunting truth of the story through directing, writing and brilliant performances by Craven and Langenkamp. After holding the viewers in suspense by the tips of their neck hairs for almost an hour and a half, the audience receives one of the most chilling twists in any modern horror film ever produced. In this scene, the heart and soul of the screenplay is revealed in the form of the “genie in the bottle” tale.

Langenkamp asks Craven, “Where exactly are you going with this new idea?” Craven begins to explain all the events that have occurred up to that point. He says he’d been having nightmares for the past few months and was keeping track of them by writing them down.

Interested, Langenkamp asks, “Do your dreams have anything to do with what’s been going on?” Craven responds, “That’s what the nightmares have been telling me and that’s what I’ve been writing.” There’s a moment of silence before Langenkamp asks about “Freddy’s involvement.”

Craven speaks about how Freddy is not just another horror icon; he’s become an entity that’s included in our mythology.

“This is what the film is about so far. It’s about this entity that has existed in different forms in different times. The only thing that stays the same is what it lives for, which is, the murder of innocents,” Craven says. At this moment, Langenkamp starts to piece together what’s been going on.

At that precise moment, it felt like I wasn’t watching another horror movie. I felt like I actually stepped into a psychological world that could physically harm me. Craven didn’t just create another movie monster; he created a legend that lives in our hearts, minds and dreams.

Four out of Four Stars 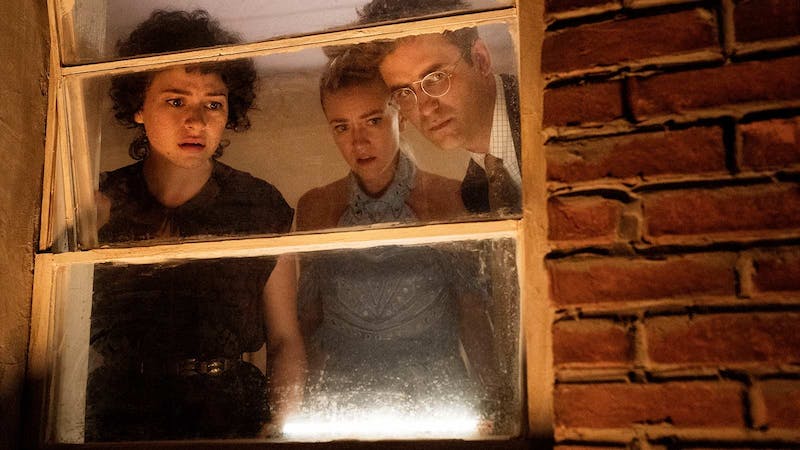